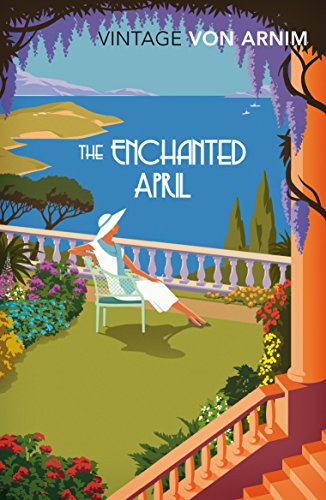 WITH AN INTRODUCTION BY BRENDA BOWEN

Mrs Wilkins and Mrs Arbuthnot, cowed and neglected by their husbands, make a daring plan: they will have a holiday. Leaving a drab and rainy London one April and arriving on the shores of the Mediterranean, they discover a flower-filled paradise of beauty, warmth and leisure. Joined by the beautiful Lady Caroline and domineering Mrs Fisher, also in flight from the burdens of their daily lives, the four women proceed to transform themselves and their prospects.

"An enchanting novel, witty, touching and very perceptively written, which will sweep you into wisteria and sunshine" (Santa Montefiore)

"Elizabeth von Armin's most charming novel in every sense: it casts a spell...a sun-washed fairytale" (Observer)

"A warm and uplifting book. (Very different from the kind I write!)...I remain in awe of a writer who can produce an enthralling story out of so little. When I'm plotting my books, I think of Von Arnim, and try to balance the dark with some lighter characterisation." (S.J. Bolton)

"Filled with hazy hills and fragrant flora, the novel is a dreamily sensuous description of the glories of Italian spring" (Adam Nicolson Mail on Sunday)

"This delicious confection will work its magic on all" (Daily Telegraph)

Funny, irreverent and full of joy, this is the perfect book to accompany you on holiday - a celebration of escaping the everyday

Descrizione libro Random House UK Ltd Jul 2015, 2015. Taschenbuch. Condizione: Neu. Neuware - Elizabeth von Arnim was born on 31 August 1866 in Australia. She was cousin to the writer Katherine Mansfield. In 1890 she married her first husband, Count Henning August von Arnim-Schlagenthin, a Prussian aristocrat, with whom she had five children. Elizabeth and her German Garden, published anonymously in 1898, was a barely fictionalised account of Elizabethżs life and the creation of her garden at the family home of Nassenheide in Pomerania, where Hugh Walpole and E. M. Forster were tutors to her children. Its instant success was followed by many more novels, including Vera (1921) and The Enchanted April (1922), and another almost-autobiography, All the Dogs of My Life (1936). She separated from Count von Arnim in 1908, and after his death two years later she built a house in Switzerland, marrying John Francis Stanley Russell in 1916. This marriage also ended in separation in 1919 when Elizabeth moved to America, where she died on 9 February 1941, aged 74. 288 pp. Englisch. Codice articolo 9781784870461

Descrizione libro 2015. Paperback. Condizione: New. Paperback. WITH AN INTRODUCTION BY BRENDA BOWEN A notice in The Times addressed to 'Those Who Appreciate Wistaria and Sunshine' advertises a 'small medieval Italian Castle to be let for .Shipping may be from our Sydney, NSW warehouse or from our UK or US warehouse, depending on stock availability. 304 pages. 0.250. Codice articolo 9781784870461