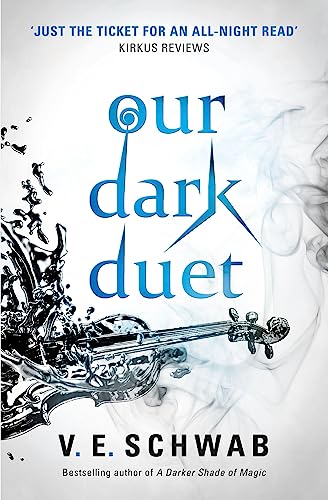 The sequel-and conclusion-to Victoria Schwab's instant #1 New York Times bestseller, This Savage Song.Kate Harker is a girl who isn't afraid of the dark. She's a girl who hunts monsters. And she's good at it. August Flynn is a monster who can never be human. No matter how much he once yearned for it. He has a part to play. And he will play it, no matter the cost.Nearly six months after Kate and August were first thrown together, the war between the monsters and the humans is a terrifying reality. In Verity, August has become the leader he never wished to be, and in Prosperity, Kate has become the ruthless hunter she knew she could be. When a new monster emerges from the shadows-one who feeds on chaos and brings out its victim's inner demons-it lures Kate home, where she finds more than she bargained for. She'll face a monster she thought she killed, a boy she thought she knew, and a demon all her own.

Everything you'd expect from V. E. Schwab. She's a genius, there's no question about it. If you love epic storytelling then look no further. You won't be disappointed. --The Book Bag

I cannot pick a favourite part, because all of it is amazing. --Abi s Book

The entire book, much like the first, is very vivid. --Reality s A Bore

"Alternating between [Kate and August's] immediate, propulsive perspectives, this sequel's narrative reveals that each is still hunting the violence-created monsters that plague their alternate United States. ...Suspenseful action sequences are well paced, with affecting moments of understanding and tenderness, building to a satisfying ending." --Horn Book Magazine

It was intense, unpredictable and crushing at times. --My Midnight Musing

Action-packed and adrenaline-fuelled, Our Dark Duet is quite the beastly roller coaster that will leave you a broken and sobbing mess. --Book Evin

V.E. Schwab is the No.1 New York Times bestselling author of ten books, including This Savage Song and the Darker Shade of Magic series, whose first book was described as "a classic work of fantasy" by Deborah Harkness. It was one of Waterstones' Best Fantasy Books of 2015, The Guardian's Best Science Fiction novels, and a Telegraph choice for the Best Young Adult Books of 2015. The Independent has called her "The natural sucessor to Diana Wynne Jones."

Descrizione libro 2017. Paperback. Condizione: New. Paperback. Age range 12 to 17The thrilling conclusion to This Savage SongKate Harker is a girl who isn't afraid of the dark. She's a girl who hunts monsters. And she's good at it. August Flynn is a m.Shipping may be from multiple locations in the US or from the UK, depending on stock availability. 368 pages. 0.350. Codice articolo 9781785652769

5. Our Dark Duet (Monsters of Verity)

6. Our Dark Duet (Monsters of Verity)

7. Our Dark Duet (Monsters of Verity)

9. Our Dark Duet (Monsters of Verity)