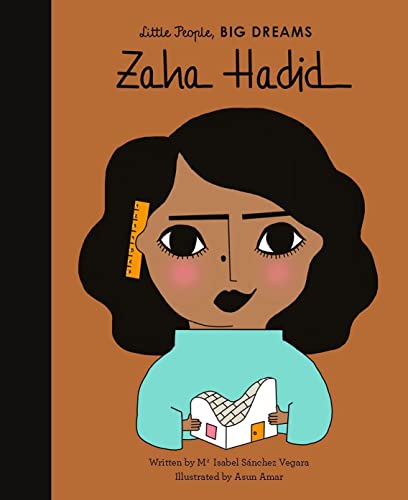 Descrizione libro Frances Lincoln Publishers Ltd, United Kingdom, 2019. Hardback. Condizione: New. Asun Amar (illustratore). New ed. Language: English. Brand new Book. Part of the critically acclaimed Little People, BIG DREAMS series, Zaha Hadid tells the inspiring true story of the visionary Iraqi-British architect. Zaha Hadid grew up in Baghdad, Iraq surrounded by music. She was a curious and confident child, who designed her own modernist bedroom at nine years old. As a young woman studying at University in Beirut, she was described as the most outstanding pupil the teacher had ever met. With her spectacular vision and belief in the power of architecture, she founded her own firm and designed some of the most outstanding buildings in the world - including the London 2012 Olympic Aquatic Centre. This inspiring book features stylish and quirky illustrations and extra facts at the back, including a biographical timeline with historical photos and a detailed profile of the architect's life.Little People, BIG DREAMS is a bestselling series of books and educational games that explore the lives of outstanding people, from designers and artists to scientists and activists. All of them achieved incredible things, yet each began life as a child with a dream. This empowering series offers inspiring messages to children of all ages, in a range of formats. The board books are told in simple sentences, perfect for reading aloud to babies and toddlers. The hardback versions present expanded stories for beginning readers. Boxed gift sets allow you to collect a selection of the books by theme. Paper dolls, learning cards, matching games and other fun learning tools provide even more ways to make the lives of these role models accessible to children.Inspire the next generation of outstanding people who will change the world with Little People, BIG DREAMS!. Codice articolo HUK9781786037442