Articoli correlati a The Shadow on the Blind (Wordsworth Mystery & Supernatur... 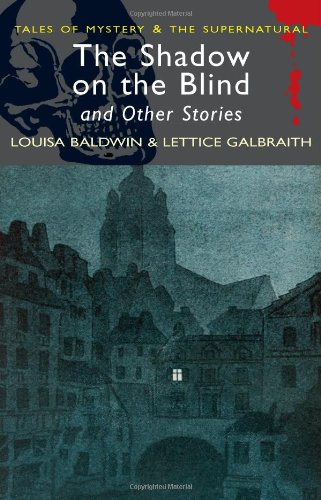 The late Victorians had an insatiable appetite for the macabre and sensational: stories of murder and suspense, ghosts, the supernatural and the inexplicable were the stuff of life to them. The two writers in this volume well represent the last decade of the nineteenth century, and are of interest in themselves as well as for their contribution to the chilling of the Victorian spine. Mrs. Alfred Baldwin attempted as a child to contact her dead sister through a seance, and took to writing when stricken by a mysterious illness six weeks after marriage. She was also the mother of the Prime Minister, Stanley Baldwin. Lettice Galbraith is herself no less mysterious than the stories she wrote. She appeared on the literary scene in 1893, published a novel and two collections of stories in that year, a further story ('The Blue Room') in 1897, and then nothing more. Readers of 'The Empty Picture Frame', 'The Case of Sir Nigel Otterburne', 'The Trainer's Ghost' and 'The Seance Room' will recognise the Victorian spirit at its fines

The Shadow on the Blind (Wordsworth Mystery and Supernatural)

Descrizione libro Paperback. Condizione: Used; Good. **SHIPPED FROM UK** We believe you will be completely satisfied with our quick and reliable service. All orders are dispatched as swiftly as possible! Buy with confidence!. Codice articolo mon0000948861

The Shadow on the Blind and Other Stories

Descrizione libro Paperback. Condizione: Very Good. The book has been read, but is in excellent condition. Pages are intact and not marred by notes or highlighting. The spine remains undamaged. Codice articolo GOR001716757

Descrizione libro Paperback. Condizione: Good. The book has been read but remains in clean condition. All pages are intact and the cover is intact. Some minor wear to the spine. Codice articolo GOR004165430

The Shadow on the Blind and Other Stories

Descrizione libro Paperback. Condizione: Good. Item is in good condition. Some moderate creases and wear. This item may not come with CDs or additional parts including access codes for textbooks. Might be an ex-library copy and contain writing/highlighting. Photos are stock pictures and not of the actual item. Codice articolo DS-1840226129-3