Articoli correlati a Heart of the Antarctic & South (Wordsworth Classics... 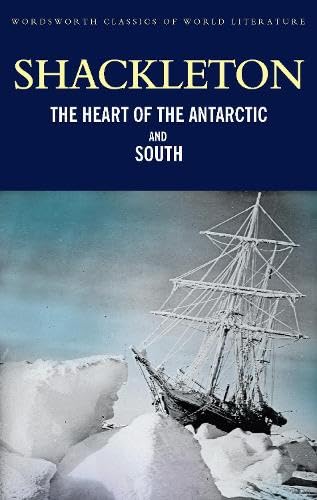 Ernest Shackleton led two Antarctic expeditions, and died shortly after the beginning of a third. His first expedition was not a total success (they did not reach the South Pole), and the second was, in some senses, a total failure (they never reached the Antarctic mainland at all). Yet it is the second for which he is remembered. His expedition ship Endurance was trapped, then crushed in the ice, before his party could be landed, leaving his men in a hopeless situation. For months Shackleton held his party together before taking to boats and bringing everyone safely to Elephant Island. His open-boat journey to South Georgia and the eventual rescue of the party left behind are now legendary. Visitors to Shackleton's grave in South Georgia, stepping over the lounging elephant seals that keep the dead company, pay homage to the man who had the vision, bravery and strength to open up Antarctica for all who followed. Shackleton showed the flame of leadership as few in the history of exploration have done, and nowhere does this come through more clearly than in the two accounts in this volume.

Now most famous for the Endurance expedition with its legendary boat journey, a story which even today remains one of the greatest feats of human endurance of all time, Shackleton remains amongst the greatest and most famous of all British explorers. Astonishingly enough, most of his expeditions were failures, yet his powers of leadership and charisma have elevated him to the ranks of the great. He is buried in South Georgia.

1. The Heart of the Antarctic and South (Classics of World Literature)

2. SHACKLETON: Heart of the Antarctic and South