Articoli correlati a The South Pole: An Account of the Norwegian Antarctic...

Amundsen, Roald The South Pole: An Account of the Norwegian Antarctic Expedition in the Fram, 1910-1912 [Lingua Inglese]

The South Pole: An Account of the Norwegian Antarctic Expedition in the Fram, 1910-1912 [Lingua Inglese] 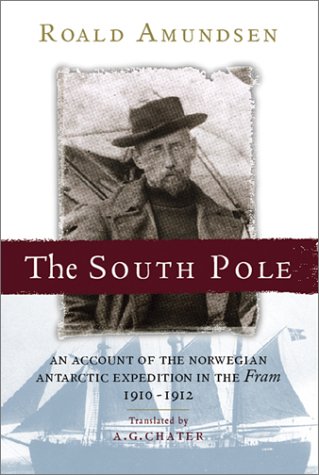 At last we got away, on October 19. The weather for the past few days had not been altogether reliable; now windy, now calm - now snowing, now clear: regular spring weather, in other words...With this matter of fact sentence begins one of the most famous journeys in all exploration - Amundsen's conquest of the South Pole. The details of the tragic race with Scott are well known, but often forgotten is the sheer professionalism and courage which drove the Norwegian expedition on. Unlike the driven and tortured egos which bedeviled the British expeditions, the Norwegians worked purposefully as a team using the latest technology, and Amundsen acknowledges this openly when the Pole was finally achieved. I had determined that the act of planting it [the flag] - the historic event - should be equally divided among us all. It was not for one man to do this; it was for all who had staked their lives in the struggle, and held together through thick and thin. This was the only way in which I could show my gratitude to my comrades in this desolate spot...Five weather-beaten, frostbitten fists they were that grasped the pole, raised the waving flag in the air, and planted it as the first at the geographical South Pole. Amundsen's Antarctic expedition of 1910-12 is one of the most heroic achievements in the history of exploration. The competence and efficiency with which it was accomplished is testimony to an inspired and inspirational leader.

In 1903, Roald Amundsen led the first expedition to successfully traverse the Northwest Passage between the Atlantic and Pacific Oceans (something explorers had been attempting since the days of Christopher Columbus, John Cabot, Jacques Cartier, and Henry Hudson), with six others in a 47 ton steel seal hunting vessel, Gjřa. During this time Amundsen learned from the local Netsilik people about Arctic survival skills that would later prove useful. For example, he learned to use sled dogs and to wear animal skins in lieu of heavy, woolen parkas. He led the first successful Antarctic expedition to the South Pole between 1910 and 1912.

1. The South Pole: An Account of the Norwegian Antarctic Expedition in the Fram, 1910-1912

2. The South Pole: An Account of the Norwegian Antarctic Expedition in the Fram, 1910-1912

Descrizione libro Birlinn Ltd, 2003. Paperback. Condizione: Good. Connecting readers with great books since 1972. Used books may not include companion materials, some shelf wear, may contain highlighting/notes, may not include cdrom or access codes. Customer service is our top priority!. Codice articolo S_280318682