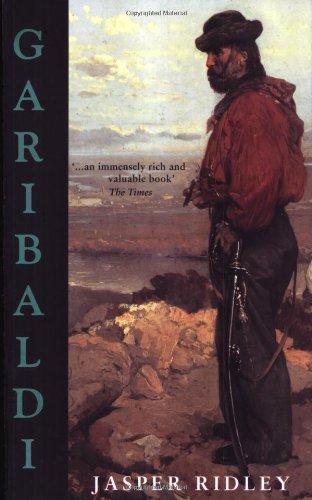 One of history's greatest reformers, Garibaldi won his first battle against Aegean pirates, his last against German dragoons. He went to jail in Russia and led Brazilian rebels in the field. He was twice an admiral and seven times a general, a high government official in at least five countries, became Commander in Chief of the Uruguayan Army, Dictator of Sicily and Freeman of the City of London. From time to time he returned to be a farmer on his island retreat of Caprera, a sea-captain on the China coast and a candle-maker in New York but emerged to snatch Palermo from the King of Naples and to throw the Austrians out of an alpine valley. But Garibaldi's primary passion remained Italy and one is constantly aware, throughout this enthralling narrative, that his single burning ambition was to see Italy united, a goal that he accomplished in 1860 when Garibaldi's Thousand (the famous Redshirts) defeated a Neapolitan army of 26,000. 'Jasper Ridley dissects every facet of Garibaldi's loveable character and personality...He excels all previous biographers when describing his subject's private life, and this exhaustive study is likely to remain the standard work for many years.' Philip Magnus The Sunday Times

Jasper Ridley gave up his practice at the bar to become one of the leading historical biographers of England, and his most recent book, Lord Palmerston, was awarded the James Tait Black Prize. He has twice stood for Parliament, and his personal experience of political affairs has given him added insight into the career of the most successful of Nineteenth-century revolutionaries. He is a fellow of the Royal Society of Literature.