Articoli correlati a Lament for a Maker

Innes, Michael Lament for a Maker

Lament for a Maker 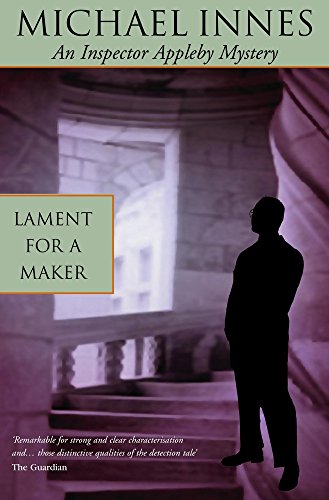 When mad recluse, Ranald Guthrie, the laird of Erchany, falls from the ramparts of his castle on a wild winter night, Appleby discovers the doom that shrouded his life, and the grim legends of the bleak and nameless hamlets, in a tale that emanates sheer terror and suspense.

Born in Edinburgh in 1906, the son of the city's Director of Education, John Innes Mackintosh Stewart wrote a highly successful series of mystery stories under the pseudonym Michael Innes.Innes was educated at Oriel College, Oxford, where he was presented with the Matthew Arnold Memorial Prize and named a Bishop Frazer's scholar. After graduation, he went to Vienna to study Freudian psychoanalysis for a year and following his first book, an edition of Florio's translation of 'Montaigne', was offered a lectureship at the University of Leeds. In 1932 he married Margaret Hardwick, a doctor, and they subsequently had five children including Angus, also a novelist. The year 1936 saw Innes as Professor of English at the University of Adelaide, during which tenure he wrote his first mystery story, 'Death at the President's Lodging'. With his second, 'Hamlet Revenge', Innes firmly established his reputation as a highly entertaining and cultivated writer. After the end of World War II, he returned to the UK and spent two years at Queen's University, Belfast, where in 1949 he wrote the 'Journeying Boy', a novel notable for the richly comedic use of an Irish setting. He then settled down as a Reader in English Literature at Christ Church, Oxford, from which he retired in 1973.Innes's most famous character is 'John Appleby', who inspired a penchant for donnish detective fiction that lasts to this day. His other well-known character is 'Honeybath', the painter and rather reluctant detective, who first appeared in 1975 in 'The Mysterious Commission'. The last of the Innes novels, 'Appleby and the Ospreys', was published in 1986, some eight years before his death in 1994. His work is still very highly regarded and 'Appleby's End' and 'The New Sonia Wayward' were chosen by H.R.F. Keating as being amongst the best 100 crime novels ever written. The 'Times Literary Supplement' said of him: 'A Master - he constructs a plot that twists and turns like an electric eel: it gives you shock upon shock and you cannot let go.'

Lament For A Maker (3) (Inspector Appleby)

LAMENT FOR A MAKER (3) (INSPECTO