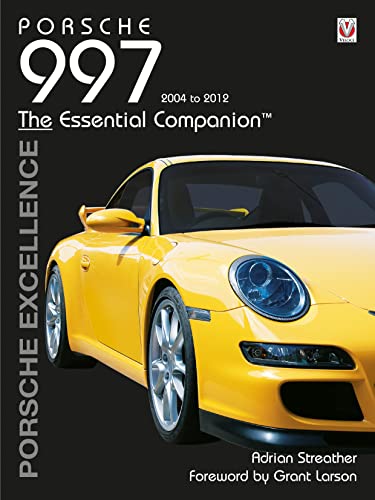 This book on the first generation Porsche 911 (997) is the fifth of six planned in The Essential Companion series, and the fourth with Veloce Publishing. It carries on the tradition established with Adrian Streather's first Porsche 911 book on the 964 series, and contains everything a 997 owner needs to know, plus a lot more.

The 997 series was the first to be fitted with Japanese-manufactured transmissions; this then-new technology, and the transmission details, is explained in depth. All other new technology advancements installed into the first generation 997 are also described, along with details of all the advantages and improvements the 997 has over previous 911 series.

Every model and version is described, along with the 3.6- and 3.8-litre engines, and the associated engine management software combinations for the many different national variants.

In other words, no matter where on the planet a 997 owner resides, their version of the car is covered in this book.

worthy of a place on your (suitably reinforced) bookshelf. --GT Porsche

this is the book any Porsche 997 owner should own. --Liebe zu Ihm (love for Porsche)

it's impossible to ignore the usefulness of this to anybody wanting to look after their car without paying dealer prices. --Auto Express

Adrian Graham Streather was born on December 25, 1958. Upon leaving school he joined the Royal Australian Air Force (RAAF) in 1975, where he trained as a Scientific Instrument Maker and gained additional qualifications in the electronics field. Adrian is the author of a number of Porsche books published with Veloce, including several in their Essential Buyer's Guide Series.