Articoli correlati a Soldiers of the Dragon: Chinese Armies 1500 BC-AD 1840 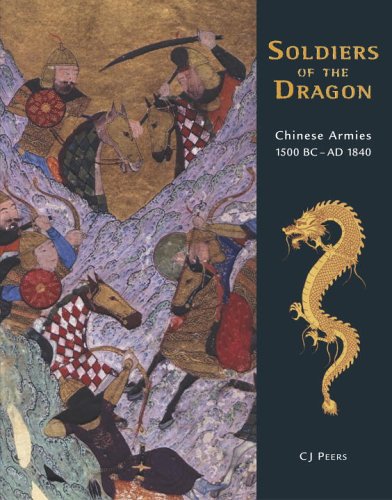 The turbulent history of China has seen many dynastic struggles over the centuries, ever since the semi-nomadic tribes of ancient China were unified under the first emperor, Cheng. From the Great Wall to the terracotta army at Xian, monuments to China's many wars, and the men who fought them, litter the landscape. This book tells the incredible story of China's armies form the first documented civilization over 3,000 years ago to the outbreak of the first Opium War with Britain in the middle of the 19th century. Written by an acknowledged expert on Chinese armies, this volume offers details of their colourful uniforms and fascinating weaponry with colour and black and white photographs, artwork, maps and diagrams. Contains material previously published in Men-at-Arms 218, 251, 284, 295 and 307.

Recensione:
"Throughout...there are outstanding illustrations, photos of extant equipment, artwork on various objects...and a superb selection of mans and charts... As a student of history, I found it to be an excellent reference and it is one that I know you will find equally as enjoyable." -Scott Van Aken, modelingmadness.com
L'autore:
An acknowledged expert on ancient Chinese armies, Chris Peers studied Oriental history at Cambridge University, and since then has pursued a lifelong interest in military history and wargaming. As well as his work for Osprey, he has published Warlords of China 770 BC to AD 1662 (Arms and Armour Press, 1998), and has contributed articles on China to the Reader's Guide to Military History (Fitzroy Dearborn, 2001). He is married with one daughter, and lives and works in Birmingham.