Articoli correlati a Freefall: Free Markets and the Sinking of the Global...

Stiglitz, Joseph Freefall: Free Markets and the Sinking of the Global Economy

Freefall: Free Markets and the Sinking of the Global Economy 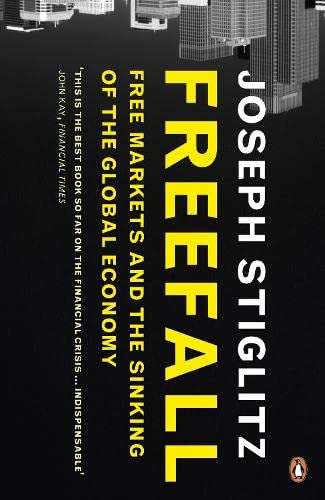 This devastating and inspiring book, by one of the world's leading economic thinkers, lays out not only the course of the financial crisis which began in 2007, but its underlying causes, and shows why much more radical reforms are needed than are currently being contemplated if we are to avoid similar 'systemic' crises in the future. It shows why the bailout has been only marginally effective and how it could have been much more so, and outlines the enormous opportunity - not yet taken - to design a new global financial architecture. It is highly critical of many of the actions not only of George Bush's administration, but also of Barack Obama's. It shows why the bulk of the cost of recovery should be borne by those in the financial sector - not just for reasons of natural justice, but for compelling economic reasons also. More than any of this, it reminds readers to think constantly about what economies are for, and the human purposes they serve.

Freefall is an instant classic, combining an enthralling whodunit account of the current crisis with a bracing discussion of the broader economic issues at stake.

Joseph E. Stiglitz was Chairman of the President's Council of Economic Advisers 1995-7 and Chief Economist at the World Bank 1997-2000. He is currently University Professor at Columbia University, teaching in the Department of Economics, the School of International and Public Affairs, and the Graduate School of Business. He is also the Chief Economist of the Roosevelt Institute and a Corresponding Fellow of the Royal Society and the British Academy. He won the Nobel Prize for Economics in 2001 and is the bestselling author of Globalization and Its Discontents, The Roaring Nineties, Making Globalization Work, Freefall, The Price of Inequality and The Great Divide, all published by Penguin.