Articoli correlati a A History of the World in 100 Objects

MacGregor, Dr Neil A History of the World in 100 Objects

A History of the World in 100 Objects 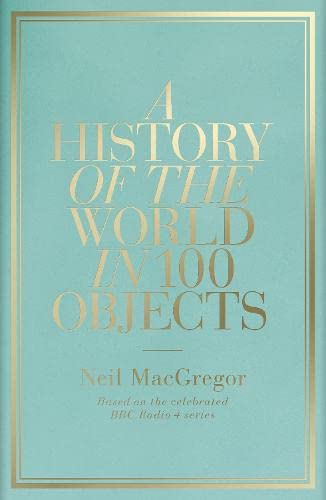 'In this book, we travel back in time and across the globe, to see how we humans have shaped our world and been shaped by it over the past two million years. The story is told exclusively through the things that humans have made - all sorts of things, carefully designed and then either admired and preserved or used, broken and thrown away. I've chosen just a hundred objects from different points on our journey - from a cooking pot to a golden galleon, from a Stone Age tool to a credit card, and each object comes from the collection of the British Museum.' [from the introduction]

This book takes a dramatically original approach to the history of humanity, using objects which previous civilisations have left behind them, often accidentally, as prisms through which we can explore past worlds and the lives of the men and women who lived in them. The book's range is enormous. It begins with one of the earliest surviving objects made by human hands, a chopping tool from the Olduvai gorge in Africa, and ends with an object from the 21st century which represents the world we live in today.

Neil MacGregor's aim is not simply to describe these remarkable things, but to show us their significance - how a stone pillar tells us about a great Indian emperor preaching tolerance to his people, how Spanish pieces of eight tell us about the beginning of a global currency or how an early Victorian tea-set tells us about the impact of empire. Each chapter immerses the reader in a past civilisation accompanied by an exceptionally well-informed guide. Seen through this lens, history is a kaleidoscope - shifting, interconnected, constantly surprising, and shaping our world today in ways that most of us have never imagined. An intellectual and visual feast, it is one of the most engrossing and unusual history books published in years.

Neil MacGregor was Director of the National Gallery, London from 1987 to 2002 and of the British Museum from 2002 to 2015. His previous books include A History of the World in 100 Objects, Shakespeare's Restless World and Germany: Memories of a Nation, all available in Penguin and now between them translated into more than a dozen languages. For his work on the BBC Radio 4 series, British Museum exhibition and book Germany: Memories of a Nation, he was awarded (in Germany) the Friedrich Gundolf Prize, the Goethe Medal and the German National Prize and (in the UK) the British Academy's Nayef Al-Radhan Prize for Transcultural Understanding. In 2010, he was made a member of the Order of Merit, the UK's highest civil honour. He is now Chair of the Steering Committee of the Humboldt Forum in Berlin.