Articoli correlati a The Book of Disquiet

Pessoa, Fernando The Book of Disquiet

The Book of Disquiet 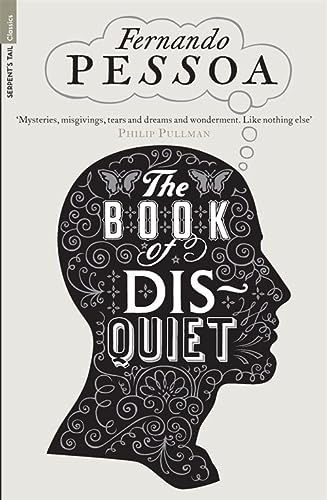 "Readers with a particular interest in modernism will find this work indispensable."—Publishers Weekly

"Pessoa's amazing personality is as beguiling and mysterious as his unique poetic output."—William Boyd

A self-deprecating reflection on the sheer distance between the loftiness of feelings and the humdrum reality of life, The Book of Disquiet is a classic of existentialist literature.

Fernando Pessoa, one of the founders of modernism, was born in Lisbon in 1888. Most of Pessoa's writing was not published during his lifetime: The Book of Disquiet was first published in Portugal in 1982.

In a time which celebrates fame, success, stupidity, convenience and noise, here is the perfect antidote (John Lanchester Daily Telegraph)

A meandering, melancholic series of reveries and meditations. Pessoa's amazing personality is as beguiling and mysterious as his unique poetic output (William Boyd)

Disturbs from beginning to end... There is a distinguished mind at work beneath the totally acceptable dullness of clerking. The mind is that of Pessoa. We must be given the chance to learn more about him (Anthony Burgess Observer)

A complete masterpiece, the sort of book one makes friends with and cannot bear to be parted with. Boredom informs it, but not boringly. Pessoa loved the minutiae of what we care to deem the ordinary life, and that love enriches and deepens his art (Paul Bailey Independent)

The very book to read when you wake at 3am and can't get back to sleep - mysteries, misgivings, fears and dreams and wonderment. Like nothing else. (Philip Pullman)

Fernando Pessoa was simply one of the best 20th-century writers ever... captivating... a series of beautifully wistful reminiscences, diary entries ad aphoristic snippets... an accessibly slimmed down and beautifully translated version of this great classic and we recommend it like crazy. Pick one up and open it anywhere and we promise you'll be richly rewarded. (Stuart Hammond Dazed and Confused 2010-05-01)

To read and then contemplate him is to be lifted a little bit above the earth in a floating bubble. One becomes both of the world and not of it. There's no one like him, apart from all of us. (Nicholas Lezard Guardian 2010-05-22)

An odd, occasionally exasperating and sometimes beautiful book and one that will be your friend at 3am on a sleepless night. (Sophia Martelli Observer 2010-10-17)

A prize-winning international classic, first published in English by Serpent's Tail in 1993, now with a new introduction by William Boyd

1. The Book of Disquiet (Paperback)

Descrizione libro Profile Books Ltd, United Kingdom, 2011. Paperback. Condizione: New. Main. Language: English. Brand new Book. Sitting at his desk, Bernardo Soares imagined himself free forever of Rua dos Douradores, of his boss Vasques, of Moreira the book-keeper, of all the other employees, the errand boy, the post boy, even the cat. But if he left them all tomorrow and discarded the suit of clothes he wears, what else would he do? Because he would have to do something. And what suit would he wear? Because he would have to wear another suit. A self-deprecating reflection on the sheer distance between the loftiness of his feelings and the humdrum reality of his life, The Book of Disquiet is a classic of existentialist literature. Codice articolo AA99781846687358

2. The Book of Disquiet

3. The Book of Disquiet

4. The Book of Disquiet