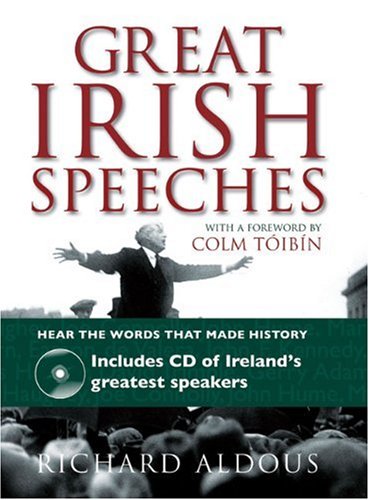 The Great Irish Speeches audio pack offers genuine historical recordings from the last 70 years of the most stirring and memorable speeches that have shaped Irish history. The CD is accompanied by an illustrated book, containing the transcripts of these and over 30 other momentous orations from throughout history. Each speech is preceded by an introduction, which places the address in context and underlines its historical significance, as well as an iconic photograph of the speaker. Presented chronologically, the book and CD together provide tremendous insight into Irish and world history.

Richard Aldous is a regular contributor to the Irish Times, among other things. He is the author of Harold MacMillan, The Lion and the Unicorn, and Tunes of Glory. Colm Tóibín is a multi-award-winning Irish novelist and critic.

Full of passion, poetry, drama and conviction, this stirring anthology is a celebration of 50 speeches that have shaped Irish history. From Henry Grattan's 18th-century cry of liberty to Bertie Ahern's declaration that “Ireland's hour has come”, Great Irish Speeches includes eulogies and damnations, new beginnings and last words, threats of war and demands for peace. Richard Aldous's selection is comprehensive and diverse. Alongside such a patriotic tour de force as de Valera's commanding rebuff of Winston Churchill is a bishop's outraged condemnation that “hell is not hot enough” for Fenian rebels. Parnell's powerful declaration of national self-determination is counterpointed by a hurling captain's impassioned lament for the Irish diaspora. And Gerry Adams's call for democratic means to replace armed struggle stands next to Ian Paisley's celebration of peace at the reopening of the Stormont assembly. This is a collection with many voices - playwrights and patriots, martyrs and men of God, rebels and Nobel Prize laureates. Each speech is accompanied by a biography of the speaker and the story of why it was significant. Inspiring and thought-provoking, Great Irish Speeches offers a unique, first-hand perspective on these turning points in Ireland's history. The oratorical skills of the greatest names in Irish politics and culture are here: Henry Grattan, Daniel O'Connell, Charles Stewart Parnell, Michael Collins, W.B. Yeats, Eamon de Valera, John F. Kennedy and Seamus Heaney, to name but a few.