Articoli correlati a The Crunch of Gravel under Thrumming Tyres [Lingua...

C. A. Green The Crunch of Gravel under Thrumming Tyres [Lingua Inglese]

The Crunch of Gravel under Thrumming Tyres [Lingua Inglese] 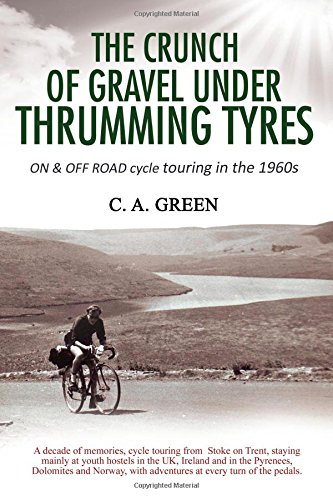 '...the Nant Rhyd Wilym Pass over the Berwyns, Wales, was one of our favourite rough-stuff routes. Crossing these high, bleak mountains from Llanarmon Dyffryn Ceiriog to Cynwyd, near Corwen, these wild, open moors, with only the sigh of the wind and the rasping rattle of a startled grouse to disturb the silence, was also the favoured pass of W. M. Robinson (alias Wayfarer) who, writing for the Cycling Magazine pioneered this off-road pastime, now recognised as mountain biking.' '...high on the summit we discovered a flat metal box lodged under a projecting rock for enthusiasts to drop in a small donation to the Roughstuff Fellowship, Wayfarer's founded organisation. We discovered a sad, bent Woodbine, a damp match and a note to contact the Salts of Bucknall and a chance to swell our ranks and get to meet these extra cycling enthusiast characters everyone.'

C. A. Green, after leaving school and thoroughly fed up of PT and combative sports on the playing field, gravitated towards the so-called lightweight 'sports' bike and made many trips from Stoke-on-Trent and into the near countryside. An initial long distance solo tour down to Plymouth in Devon, staying at youth hostals overnight, really lit the fuse for the pastime. With an interest in photography and scrutinizing maps, he found two hobbies that fully complimented the cycle touring. Continued cycling led to joining the local YHA, touring wild Wales and, inevitably, meeting a gathering of like-minded cyclists. Tours as groups spread to Ireland, Ulster and the continent, including the Pyrenees of France and Spain, the Dolomites of northern Italy and the Norwegian fjords. By the end of the 1960s, the cyclists went their seperate ways and C. A. Green joined a few friends to continue cycle touring and camping. Age and arthritis finally caught up with him, thrusting a spoke in his wheel. He hung up his cycle clips and decided all this history on two wheels should be set down on paper.