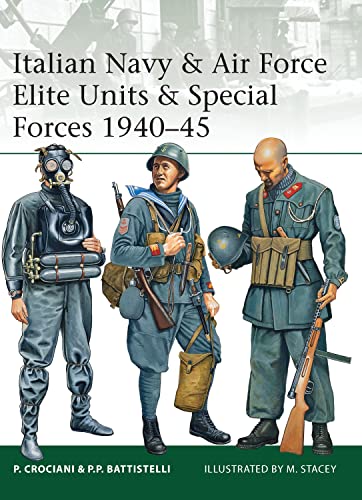 This is an interesting, well-illustrated book that looks at the familiar (10th MAS) and unfamiliar (all the rest), and gives a broader picture of the Italian Special Forces than is often the case. - historyofwar.org Fine artwork by Mark Stacey and some photographs that are considered rare illustrate the intriguing story of these elite Italian units in this 64-page paperback. --Toy Soldier & Model Figure

In summary, this is a very well written and fascinating insight into the elite units of the Italian Navy and Army Force during the Second World War and is recommended for both the general reader and the expert alike. --Miniature Wargames

Italy's navy and air force special forces carved out a formidable reputation in World War II, earning the respect of allies and opponents alike in a host of different roles and environments, from manned torpedoes in the Mediterranean to commando-style forces in North Africa.