Giorno, John You Got to Burn to Shine/New and Selected Writings

You Got to Burn to Shine/New and Selected Writings 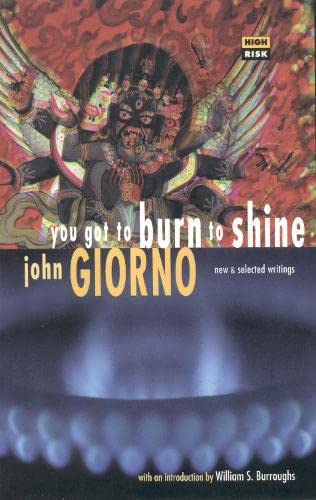 The originator of Spoken Word and performance poetry, John Giorno is one of the most influential figures in the world of contemporary performance. You Got to Burn to Shine, his first book in many years, collects intensely rhythmic, sexual and philosophical poetry spanning two decades.
Here, too, are deeply personal memoirs, including the story of his friendship with Andy Warhol (Giorno had an occasionally sexual relationship with Warhol, met his mother, and starred in Warhol's first film Sleep); an anonymous sexual encounter with Keith Haring, an aspiring painter who recognized Giorno in a subway station toilet; and notes toward a Buddhist understanding of death in the age of AIDS.

?John Giorno raises questions to an almost unbearable pitch, to a scream of surprised recognition. His litanies from the underworld of the mind reverberate in your head and ventriloqize your own thoughts.??William S. Burroughs ?Highly recommended for those who aren?t familiar with Giorno as well as those who are.??American Bookseller

1. You Got to Burn to Shine: New and Selected Writings (High Risk Books)