Articoli correlati a The Waterloo Companion: The Complete Guide to History's...

The Waterloo Companion: The Complete Guide to History's Most Famous Land Battle 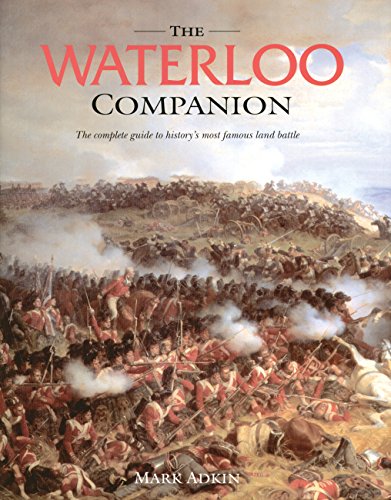 While many books have been published on Waterloo, none have rivalled this in either scale or authority.

The text, based on Adkin’s fastidious research, including many days spent on the battlefield itself, does far more than simply narrate the events of 18 June 1815. The author provides as much analysis as he does description: plans are examined, commanders assessed and manoeuvres painstakingly related to the ground. Armies, weapons and tactics are comprehensively explored and evaluated.

As with Adkin’s companions to the battles of Trafalgar and Gettysburg, the text focuses on myths and controversies surrounding the events, as well as elements often neglected in other narrative accounts –such as the performance of the French ‘Grand Battery’ or the Prussian attacks on Plancenoit.

Divided into ten sections, The Waterloo Companion can be dipped into as a reference guide or read cover to cover. Featuring little-known information and first-hand accounts of those who fought at Waterloo, it also covers soldier and command structures, tactics and topographical details. Each section is put in context of the battle and enhanced by maps, plans, drawings and diagrams.

The Waterloo Companion is an absolute must-have for any historian hoping to further their understanding of one of the world’s most famous land battles.

Mark Adkin, a former army officer, is the author of The Waterloo Companion, The Trafalgar Companion and The Gettysburg Companion, all published by Aurum. He has also authored several other books on military history, including Goose Green, The Bear Trap and The Charge. He has also written the bestselling Sharpe Companion to accompany the TV series.

1. The Waterloo Companion: The Complete Guide to History's Most Famous Land Battle