Articoli correlati a Liberalism, Democracy and the State in Britain: Five...

Liberalism, Democracy and the State in Britain: Five Essays, 1862-1891

Liberalism, Democracy and the State in Britain: Five Essays, 1862-1891 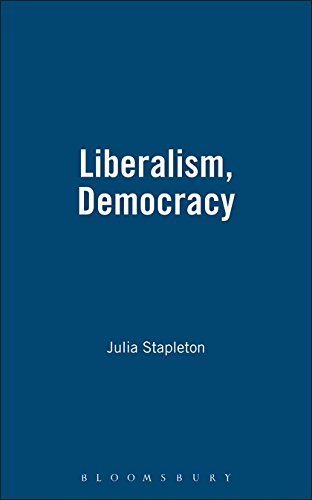 'I am most impressed. I think that the introduction is admirably comprehensive, and very up-to-date in its range of reference. The detailed editing of extracts is not too instrusively explanatory (as this inhibits their use as teaching material) but in its provision of biographical and other notes is a model of its kind'
- Professor Christopher Harvie, author of The Lights of Liberalism

The five pieces reprinted here are part of the vibrant polemical literature of liberalism in the last four decades of the nineteenth century. They illustrate a creed whose adherents were acutely aware of its recent achievements and further potential in shaping British society and politics. The dynamic, highly reflective nature of British liberalism in this period is already familiar through substantial texts such as Mill's Subjection of Women (1869) and Spencer's The Man Versus the State (1884). However, many works on a smaller scale were also important in defining the contours of liberal thought when the political fortunes of liberalism were at their height. This volume represents a sample of such writings. It will be of interest to scholars and advanced undergraduates studying liberalism and English political thought and history.

--illustrates the significant liberal debate that took place during this period through short articles rather than the well-known larger works like Stephen's Liberty, Equality, Fraternity
--includes two items never before reprinted
--a good first entry point - these are short, accessible writings that were aimed at the educated general reader

Descrizione libro Bloomsbury Publishing PLC, United Kingdom, 1997. Hardback. Condizione: New. 1997 ed. Language: English. Brand new Book. "Primary Sources in Political Thought" makes available a number of important but, until now, inaccessible texts in the history of political thought. Many of these have been overshadowed by longer or more famous works by the same authors, lost in the obscurity of periodical publication, never translated into English, or overlooked or neglected by modern scholars. The series aims to present definitive editions of these texts. The five pieces reprinted here are part of the polemical literature in the last four decades of the 19th century. They illustrate a creed whose adherents were acutely aware of its recent achievements and further potential in shaping British society and politics. Codice articolo LHB9781855065345