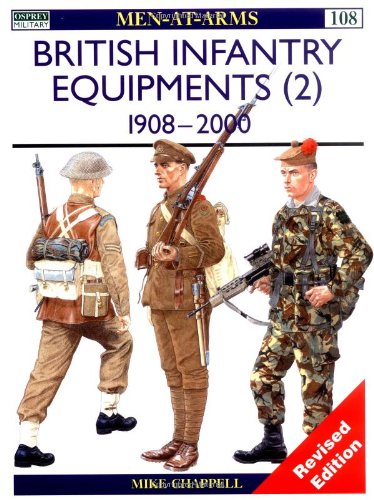 The conflict in South Africa from 1899 to 1902 gave the British military establishment reason to effect swift reforms in the period which followed the end of the hostilities. The humiliating defeats suffered at the hands of a comparatively small number of Boer citizen-soldiers in the opening months of the war showed up deficiencies in leadership, training and equipment. In a companion volume to Men-at-Arms 107: British Infantry Equipments 1808-1908, Mike Chappel examines the period from 1908-80 in a text complemented by numerous illustrations including eight full page colour plates by the author himself.

Mike Chappell comes from an Aldershot family with British Army connections stretching back several generations. He enlisted as a teenage private in the Royal Hampshire Regiment in 1952. Over the next 22 years of infantry soldiering, many of them spent with the Gloucester Regiment, he held every rank and many regimental appointments up to WO1 and Regimental Sergeant Major. he retired in 1974, as RSM of the 1st Battalion The Wessex Regiment (Rifle Volunteers), after seeing service in Malaya, Cyprus, Swaziland, Libya, Germany, Ulster and home garrisons. He began painting military subjects in 1968 and since then has gained worldwide popularity as a military illustrator. Mike has also written and illustrated many quality books in the Osprey Military list.