Articoli correlati a The Essence of the Thing

St. John, Madeleine The Essence of the Thing

The Essence of the Thing 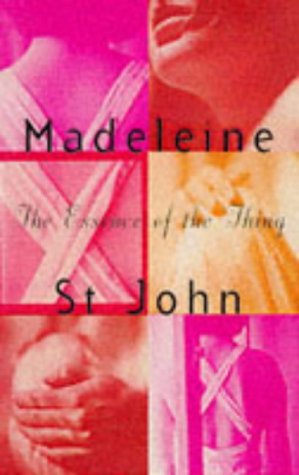 An exciting new talent, hailed as ‘a triumph’ by The Times, and a poignant observer of human hearts, foibles and follies.

Nicola’s problems began when she is finally told by her partner, Jonathan, ‘that we should part...’. She nips out to the off-licence to buy cigarettes and returns to find a stranger in her living room. The stranger looks like Jonathan, talks like Jonathan, yet Nicola did not recognise him as the man he was before. Jonathan had always been predictable, but now Nicola wondered where was the man she loved? How did he become such a mystery all of a sudden? Since when did a solicitor have hidden depths?

Friends gather round, always ready to offer encouragement or insult her ex-lover, yet Nicola must face up to the adjustments of Life After Jonathan. It is not the experience of liberation, empowerment and excitement it is meant to be. Madeleine St John’s third novel is haunting and hilarious. St John is at her bittersweet best writing of the things women will do to hold on to love and the things men will do to escape it .

‘There isn’t a false note in the book, nothing but ravishing grace, wit and tender feelings.’
Mail on Sunday

Madeleine St John was born in Sydney and graduated from the University there in 1963. She has spent most of the intervening years living in London. This is the author’s third novel, her first being Women in Black and in 1996, A Pure Clear Light, which was acclaimed by The Times as ‘a triumph’.

1. The Essence Of The Thing

Descrizione libro Fourth Estate, 1997. Paperback. Condizione: New. Select Expedited Shipping (just $3 more) to get your book as fast as possible!Clean, unmarked copy. In great shape! I can send expedited rate if you chose; otherwise it will promptly be sent via media rate. Got any questions? Email me; I'm happy to help!. Codice articolo SKU1040299

2. The Essence of the Thing

Descrizione libro Fourth Estate, 1997. Paperback. Condizione: New. UNUSED, BRAND NEW, NOT EX-LIBRARY, 234 pages. There's no nice way to say this . I've decided - that is to say, I've come to the conclusion - that we should part .'And with that conclusion. Nicola's troubles begin. She only nipped out to the off-licence to buy cigarettes, for God's sake, and she comes back to find this stranger in her sitting room! He looks like Jonathan, even talks like Jonathan (though, lawyer that he is, she still can't recall him expressing himself quite so stiffly and legalistically as this), but he can't actually be Jonathan. Can he?Solid as the Bank of England, steady as today's Telegraph: the whole point of Jonathan is his predictability. How can this be happening? Where is the man she loves? The ultimate known quantity, how did he become such a mystery all of a sudden?He's a rat. says Susannah: a pig. prefers Lizzie - yet as her friends make their way through the animal kingdom in search of an adequate epithet, all a desolate Nicola can see is the same old Jonathan - strong, adorable, handsome, hers. Except that, apparently, he isn't any more.A sad tale, it's true - but it has its funny side. You have to laugh when you see, as acutely, as elegantly as they're captured here, the things women will do to hold onto love, and the things men will do to escape it. 351. book. Codice articolo 5370e