Articoli correlati a Charlatans or Saviours?: Economists and the British...

Middleton, Roger Charlatans or Saviours?: Economists and the British Economy from Marshall to Meade

Charlatans or Saviours?: Economists and the British Economy from Marshall to Meade 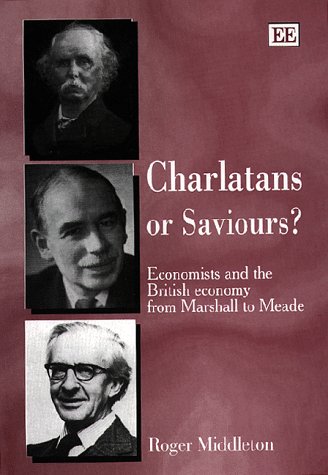 Charlatans or Saviours? is the first detailed analysis of professional British economists from Marshall, through Keynes and Meade to the present day. It examines the relationship between professional economists and economic policy in an attempt to answer the question: `Can economics and professional economists be blamed for the relative decline of the British economy?' This book provides an unrivalled account of how economic policy is made in practice. It uses examples of major policy decisions to show how policy debates develop and then assesses the subsequent balance between political, bureaucratic and economic influence. In this path-breaking investigation Roger Middleton sheds new light on Britain's relative economic decline by examining the advice economists have given to government. He analyses whether economists are partly responsible for this decline or whether they are largely innocent and unnecessarily blamed by politicians. In discussing the rise of professional economics he demonstrates that from the time of Marshall onwards the market for economic policy advice in Britain has been unusually competitive. In addition, Roger Middleton explores the broader concern in contemporary economics, that is, the pursuit of rigour at the expense of relevance. This in-depth study will be welcomed by economists interested in policy making, the history of economic thought, economic historians and political scientists.