Articoli correlati a Comparative Law in a Changing World

Comparative Law in a Changing World 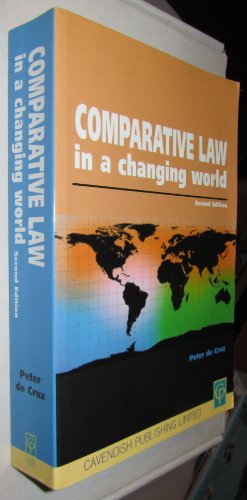 Providing a comprehensive and comparative analysis of the legal approach to key areas of law within different legal systems, this book also offers a blueprint for comparative legal study by evaluating the current epistemological debate on Comparative Law and demonstrating comparative legal research methods.

Substantive law, the law of obligations, commercial and corporate law within the major legal systems of the world are all examined and compared. While France and Germany are generally used as the archetypal civil law jurisdictions and English law as the main common law comparator, the third edition also examines the Russian Federation in the post-Soviet era and socialist legal influences as well as non-Western legal traditions. Fully updated and revised to include all recent developments, this edition also includes a broad historical introduction and outlines changes in EC Law.

It assesses the possibility of Europeanization of national legal systems and certain legal topics, the impact of the globalization of legal institutions and the evolving 'new world order' in the early twenty-first century.

Written in a clear, user friendly style, Comparative Law in a Changing World is an accessible source for undergraduates and postgraduates wishing to trace the influence of common law and civil law legal traditions on jurisdictions across the world.

1. Comparative Law in a Changing World

Descrizione libro Routledge-Cavendish, 1995. Condizione: Good. This is an ex-library book and may have the usual library/used-book markings inside.This book has soft covers. In good all round condition. Please note the Image in this listing is a stock photo and may not match the covers of the actual item,900grams, ISBN:9781859414323. Codice articolo 7806423

2. Comparative Law in a Changing World

Descrizione libro Paperback. Condizione: Good. The book has been read but remains in clean condition. All pages are intact and the cover is intact. Some minor wear to the spine. Codice articolo GOR003033802