Articoli correlati a For Marx 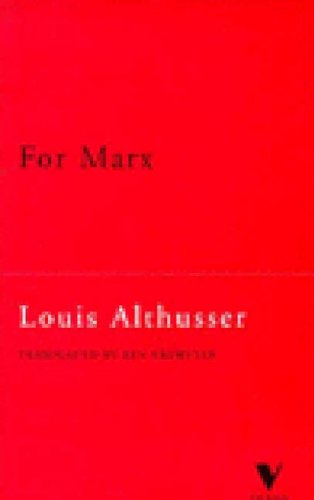 The publication of "For Marx" in 1965 established Louis Althusser as an original and controversial Marxist philosopher. It contains Althusser's polemic revaluation of Marx's early works, his essay on "Contradiction and Overdetermination" and other articles on philosophy, ideology and aesthetics. Other works by Louis Althusser include "Reading Capital", "Montesquieu", "Rousseau and Marx" and "Essays in Ideology". The book has come to be regarded as the founding text of the school of "structuralism Marxism" which was presided over by the enigmatic figure of Louis Althusser. Structuralism constituted an intellectual revolution in the 1960s and 1970s, and radically transformed the way philosophy, political and social theory, history, science and aesthetics were discussed and thought about. The book was a key contribution to that process and it fundamentally recast the way in which many people understood Marx and Marxism. The book contains the classic statements of Althusser's analysis of the young Marx and the importance of Feuerbach during this formative period, of his thesis of the "epistemological break" between the early and the late Marx, and of his conception of dialectics, contradiction and "overdetermination". Also included is a study of the materialist theatre of Bertolazzi and Brecht and the critique of humanist readings of Marxism. Since his death in 1990, Althusser's legacy has come under renewed examination, and it is increasingly recognized that the influence of his ideas has been wider and deeper than previously thought.

“One reads him with excitement. There is no mystery about his capacity to inspire the intelligent young.”—Eric Hobsbawm

“Louis Althusser traversed so many lives ... so many personal, historical, philosophical and political adventures; marked, inflected, influenced so many discourses, actions and existences by the radiant and provocative force of his thought ... that the most diverse and contradictory accounts could never exhaust their source.”—Jacques Derrida

Louis Althusser was born in Algeria in 1918 and died in France in 1990. He taught philosophy for many years at the Ecole Normale Superieur in Paris, and was a leading intellectual in the French Communist Party. His books include For Marx; Reading Capital (with Etienne Balibar); Essays in Ideology; Politics and History: Montesquieu, Rousseau, Marx; Machiavelli and Us; and The Spectre of Hegel.