Articoli correlati a The Siren and Selected Writings

The Siren and Selected Writings 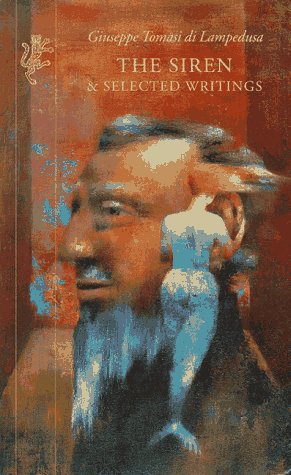 Although best known as author of a singular masterpiece, The Leopard, the Prince of Lampedusa left a rich and varied oeuvre that repays a careful reading. The best and most representative of it is collected in this volume. Places of My Infancy, a childhood memory of the Lampedusa palace in Palermo at the turn of the century, and of the great family mansion inland at Santa Margherita, provides a fascinating background to the princely setting of The Leopard. The text hitherto published had been edited and pruned by the author's widow, and resulted in a somewhat impoverished version. Here the author's original text - with many characters and incidents earlier suppressed - has been fully restored. The story of The Professor and the Siren, a delicious example of Lampedusa's fantasy, and The Blind Kittens (the first chapter of an unfinished novel of bourgeois Sicily that would have formed a pendant to The Leopard) both featured as appendices to Harvill's earlier edition of the great novel. They are included here together with a charming, comic, bitter-sweet story, Joy and the Law. Guiseppe di Lampedusa's knowledge of English literature, which derived from a lifetime's reading as well as from a number of extended visits to Britain as a young man, bore fruit in a series of informal seminars he gave in his later years at Palermo. The plan was to introduce his listeners to English writers from Bede to Aldous Huxley, pausing along the way not only at the great classics but also among the lesser known Restoration poets and Victorian novelists. To this, as also in his shrewd and dynamic appraisal of the French novelist Stendhal, he brought the lucid intellect and warmth of feeling that informs hisown deeply Sicilian creative genius.

1. The Siren; and Selected Writings