Articoli correlati a The Sail & Steam Navy List: All the Ships of the... 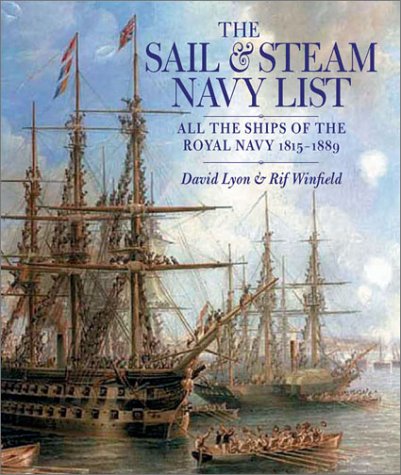 The first-ever comprehensive listing of all Royal Navy ships in the period of transition from sail to steam propulsion. Superbly illustrated from the archives of the National Maritime Museum. An authoritative reference work of impeccable pedigree. David Lyon's earlier The Sailing Navy List is one of the great works of naval reference: this volume represents the culmination of his research and covers the period from the end of the Napoleonic wars up to the Naval Defence Act of 1889 and the appearance of the pre-dreadnought. The design histories of many of the ships of that time are convoluted, misunderstood and often wrongly described in existing books, so this work is a major breakthrough, comparable with the author's earlier work, and offers the reader a comprehensive listing of all the ships with their characteistics coherently described. Organised by type and class, it contains details of the ships' dimensions, armament, building data and fates; for steam ship, details of propulsion systems are given, and as well as all major and minor warships, it includes coastguard vessels, auxiliaries and yard and harbour craft. Chapter introducions outline design development during this vitally important period that saw the advent of steam power and the eclipse of sail. This publication of this monumental work will be a major milestone in maritime reference publishing. Superbly illustrated throughout, and designed and produced to the highest standards, it will also become a collector's item and a treasured work in any naval library. DAVID LYON spent most of his life working at the National Maritime Museum where he looked after the world's largest collection of ships' plans. He was one of the finest ship historians of his generation with many books, articales and conference papers to his name. He died in 2002. RIF WINFIELD is an authroity on historic ships, the author of The Fifty-Gun Ship and the compiler of many valuable lists of naval vessels.