Articoli correlati a Why Wars Happen 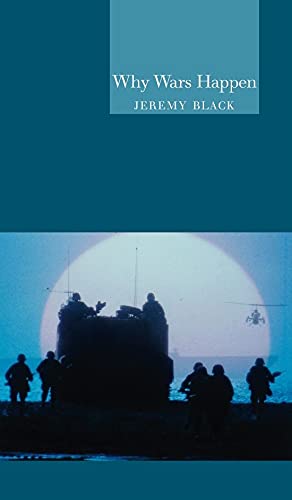 Why Wars Happen is a groundbreaking inquiry into the crucial yet surprisingly understudied question of why wars occur. Jeremy Black, one of Britain's foremost military historians, presents an interdisciplinary study that draws on subjects such as history, political science, and international relations and marshals a vast range of material with global examples spanning from the fifteenth century to today.

Black examines several major modern wars in their historical contexts, taking into account cultural differences and various conflict theories. He analyzes the three main types of war—between cultures, within cultures, and civil—and explores the problems of defining war. Black's investigation inspires fascinating questions such as: Do wars reflect the bellicosity in societies and states, or do they largely arise as a result of a diplomatic breakdown? How closely is war linked to changes in the nature of warfare, the international system, or the internal character of states? Black also considers contemporary situations and evaluates the possible course of future wars. Offering a valuable and thought-provoking analysis on the causes of war and conflicts, Why Wars Happen will interest historians and readers of military history alike.

Jeremy Black is professor of history at the University of Exeter. His many books include Britain since the Seventies, Why Wars Happen, and Maps and Politics, the last copublished with the University of Chicago Press.

Descrizione libro Reaktion Books, United Kingdom, 2005. Hardback. Condizione: New. Language: English. Brand new Book. In this deeply informed book, renowned historian Jeremy Black addresses the crucial question of why wars happen, bridging the disciplines of history, political science and international relations, and spanning over the centuries. Black marshals an astonishing range of material from all corners of the globe, and demonstrates the universalities of conflict. What then causes wars? Do they primarily reflect bellicosity in societies and states, or do they arise as the result of the breakdown of diplomatic systems? How far are the causes of war related to changes in the nature of warfare, of the international system or of the internal character of states? Black looks at the problems of deepening war, and analyses the three main forms of conflict: wars across cultures, wars within cultures and civil war. He also assesses the present situation and asks where we are heading in terms of future wars. Codice articolo BTE9781861890177