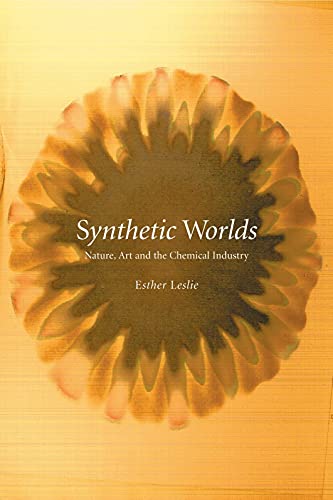 This revealing study considers the remarkable alliance between chemistry and art from the late eighteenth century to the period immediately following the Second World War. Synthetic Worlds offers fascinating new insights into the place of the material object and the significance of the natural, the organic, and the inorganic in Western aesthetics.

Esther Leslie considers how radical innovations in chemistry confounded earlier alchemical and Romantic philosophies of science and nature while profoundly influencing the theories that developed in their wake. She also explores how advances in chemical engineering provided visual artists with new colors, surfaces, coatings, and textures, thus dramatically recasting the way painters approached their work. Ranging from Goethe to Hegel, Blake to the Bauhaus, Synthetic Worlds ultimately considers the astonishing affinities between chemistry and aesthetics more generally. As in science, progress in the arts is always assured, because the impulse to discover is as immutable and timeless as the drive to create.

Esther Leslie is lecturer in English and humanities at Birkbeck College, University of London, and the author of Walter Benjamin: Overpowering Conformism and Hollywood Flatlands: Critical Theory, Animation and the Avant-garde.

Descrizione libro Reaktion Books, United Kingdom, 2006. Hardback. Condizione: New. Language: English. Brand new Book. "Synthetic Worlds" considers the remarkable alliance between chemistry and art, taking us from the late eighteenth century to the period immediately following the Second World War. Esther Leslie offers fascinating new insights into the place of the material object and the significance of the natural, the organic, the inorganic and the synthesized in this poetics of science. Through its dazzling innovations, which began in the nineteenth century, chemistry has granted new colours and surfaces, new substances, coatings and textures to the world. Often they are the result of accidents or the by-products of pollution. Chemistry has also invented stimulants and surrogates for naturally occurring materials. Sometimes these developments confounded earlier alchemical and Romantic philosophies of science and nature, but, at other times, dynamic theories of chemical action combined with the emergent chemistry textbook orthodoxy.For example, the colour wheels of Goethe and Philipp Otto Runge, Hegelian theories of a spirit that inhabits dyes and drives' materials, and Romantic ideas of the weddings of substances influenced the experiments that boosted the successful German chemical industry after the 1840s. In turn, chemistry's discoveries seeped back into philosophy and art. Esther Leslie's "Synthetic Worlds" considers this and other startling affinities between chemistry, industry, aesthetics and art. Themes include the impact of artificial imitations and synthetics, the location of value, the mutability of substance, chemical fragility and artistic technique, the poetics of the inorganic and pollution, Bauhaus-influenced modulation and patina in art practice, and nationalist narratives of chemical breakthrough. Codice articolo BTE9781861892485