Articoli correlati a Pictures and Visuality in Early Modern China 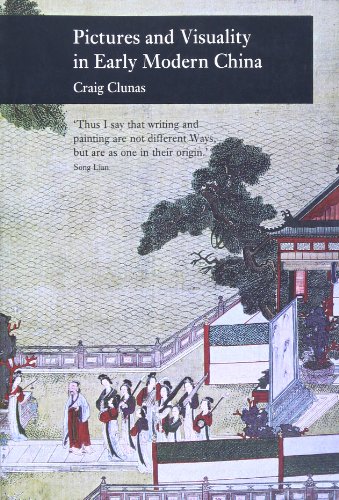 Pictures and Visuality in Early Modern China is not simply a survey of sixteenth-century images, but rather, a thorough and thoughtful examination of visual culture in China's Ming Dynasty, one that considers images wherever they appeared—not only paintings, but also illustrated books, maps, ceramic bowls, lacquered boxes, painted fans, and even clothing and tomb pictures.

Clunas's theory of visuality incorporates not only the image and the object upon which it is placed but also the culture which produced and purchased it. Economic changes in sixteenth-century China—the rapid expansion of trade routes and a growing class of consumers—are thus intricately bound up with the evolution of the image itself. Pictures and Visuality in Early Modern China will be a touchstone for students of Chinese history, art, and culture.

Craig Clunas is professor of History of Art at the University of Oxford. He is the author of many books, includingFruitful Sites: Garden Culture in Ming Dynasty China and Elegant Debts: The Social Art of Wen Zhengming, also published by Reaktion Books.

Descrizione libro Reaktion Books, United Kingdom, 2012. Paperback. Condizione: New. Reissue. Language: English. Brand new Book. The sixteenth century in China was a period of rapid and unprecedented economic expansion. The period also saw a parallel growth in the sphere of cultural production,as a growing class of consumers benefited from the formation of one of the classic early modern consumer societies. Pictures were a major source of consumable luxury at this time; pictures not only in the form of images classifiable as 'art', but also in the form of wall decoration, in books, maps, images on ceramics, and even on the dress of the prosperous. Artefacts that had previously been decorated with formal patterns now bore landscape scenes, representations of historical characters and incidents, and scenes from literature, often closely related to the world of the illustrated book. This is the first survey of this vast array of images in all its aspects, providing a stimulating and innovative point of entry to Chinese history. Pictures and Visuality in Early Modern China will be of interest to students of China's history and culture and to anyone exploring theories of visuality. Codice articolo BTE9781861896681