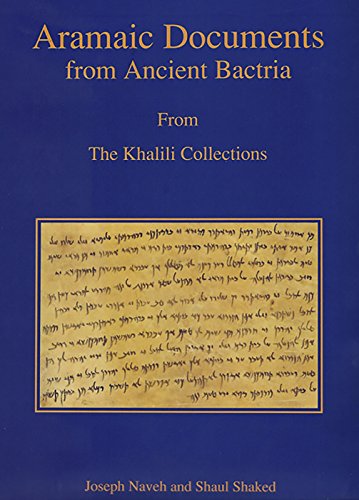 First publication of a group of thirty documents on leather in Imperial Aramaic, dating to the fourth century B.C.E. and reflecting the practice of the Achaemenian administration in Bactria and Sogdiana. Eighteen inscribed wooden sticks, for use as tallies, dated to the third year of King Darius Ill, are also included. They are considered to be the second most important discovery of its type known. Two of the leather documents relate to the fall of the Persian Empire: one mentions Bessus, the usurper of the Persian throne, travelling to Warnu (Greek Aornos); the other is a long list of supplies in the year 7 of King Alexander. In addition to their valuable historical contents, the documents enrich our knowledge of Aramaic and its lexicon. The documents are given in Aramaic with translation, introduction, commentary and glossary. The volume is lavishly illustrated.

Aramaic Documents from Ancient Bactria (Studies in the Khalili Collection)

Descrizione libro Hardcover. Condizione: New. xxi, 14-294 pages : color illustrations, color facsimiles, color maps ; 32 cm "Letters and accounts connected with the court of the satrap of Bactria, Akhvamazda, and with his governor, Bagavant . the first time that parts of the internal correspondence of the administration of Bactria and Sogdiana have come to light. . This is the fourth century BCE, close to the end of the Achaemenid rule in Iran . in the north-eastern tip of the empire. . Some of the items in this collection are written on wooden sticks, the first time that this system of bookkeeping is being discovered anywhere, and they are remarkably well preserved. . The present book, with the original documents that it contains, gives a picture of everyday life in an important Achaemenian province. It affords a glimpse into . how a large empire of antiquity was run and how the Persian rule was ultimately replaced by a Greek administration. The notes in this book show the continuity in usage from Achaemenian to Sasanian, and sometimes up to modern times.". Codice articolo Corpus103