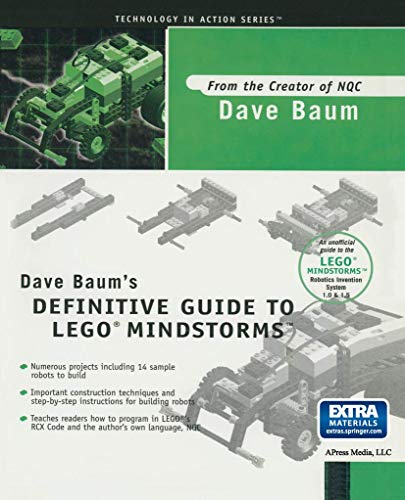 The Lego Mindstorms Robotics Invention System was introduced in 1998, and quickly became Lego's best-selling kit. From its surveys, Lego found that the median purchasing age for the Mindstorms kit is 23. The Mindstorms Programmable Brick, called the RCX, contains a microcomputer that enables those who build the robots to then program their movement. Sensors and motors can be attached to the RCX and an ordinary Lego model can move, sense and respond to its environment. The Mindstorms kit does include basic instructions and sample robots, but these are not comprehensive. This book includes a variety of new robots, explanations for readers, and theory behind the practice of building robots.

"... will prime your creative thought processes as you begin to design your own Mindstorms robots. It's a great introduction to Mindstorms for kids and grownups alike." (David Wall in amazon.com) "It's very readable with a decent selection of robot plans, plus a CD-ROM holding Baum's own NQC compiler in Windows, MacOS and Linux forms, plus a demo version of RoboLab." (DEMON)

Dave Baum is the creator of NQC, a powerful language for programming Mindstorms robot. He holds a bachelor of science degree in mathematics and computer science from the Massachusetts Institute of Technology. Baum is currently a Distinguished Member of the Technical Staff at Motorola.