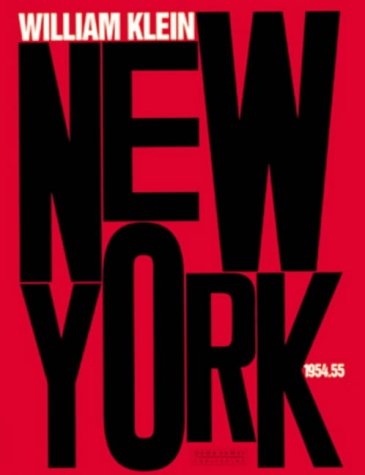 In 1956, William Klein's NEW YORK, one of the most important books in the history of photography, was published. The work created a veritable revolution. Breaking with the medium's taboos and traditions, Klein developed a radically new way of taking pictures, inventing a violent, graphic style combining black humour, social criticism, satire, and poetry.
"For the first time, wrote the poet and critic Alain Jouffroy, photographs led the evolution of the visual rats. Klein developed practically all of the themes dealt with later by Pop Art and the New Realism..."
The book whose original title was NEW YORK IS GOOD & GOOD FOR YOU became a legend, an entry in rare book catalogues... and impossible to find. Therefore, a group of six European publishers, with Japanese and American partners, planned a re-edition. The design and content of this new version are considerably changed - almost a hundred more pages and dozens of never before published pictures.
Painter, photographer, movie maker, American in Paris, William Klein escapes pigeonholes, categories, movements.
Born in New York in 1928, Klein grew up on the mean streets of Manhattan, shuttling between blackboard jungles, experimental schools, pool halls and the Museum of Modern Art. At eighteen, he graduated from New York's City college and, at twenty, after serving for two years in the US Army in Europe (of which one was at the Sorbonne!), he settled in Paris to become a painter. He worked briefly with Fernand Leger and in the early fifties did kinetic murals for Italian architects, absorbing along the way European visual history from Masaccio to the Bauhaus.
In 1954, after six years of experimenting in painting, graphic design, and abstract photography, he returned to New York, where he embarked on a complicated love-hate affair with his native city that became an unique photographic adventure. Half amazed foreigner, half streetwise New Yorker, he set out to record on film his vision in a photographic diary.