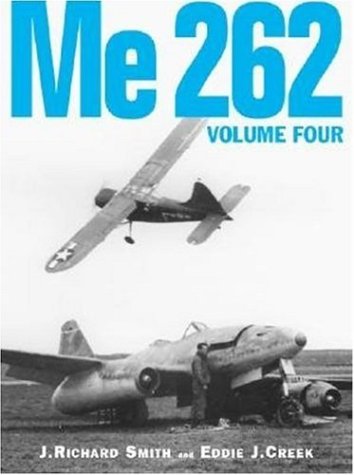 This is the fourth and final volume in J. Richard Smith and Eddie J Creek's chronological study of the Messerschmitt Me 262 and it concludes the work by focusing on the last, desperate days of the jet's daylight combat operations during April and May 1945. Using rare eye-witness accounts, the authors portray both sides of the air war between the Me 262 and Allied piston engine fighters and bombers. The authors have drawn extensively from the personal accounts of both German and Allied pilots as well as thousands of archive documents. Also included in the volume is an in-depth look at various high-speed and swept wing variants and projects and also a detailed study of American, French, British, Czech, and Japanese post-war testing and evaluation and production. This final aspect of the Me 262 story is complemented by many rare photographs taken in both Germany and overseas as well as accompanying full-color artwork.

Descrizione libro Classic Publications, 2001. Condizione: Good. A+ Customer service! Satisfaction Guaranteed! Book is in Used-Good condition. Pages and cover are clean and intact. Used items may not include supplementary materials such as CDs or access codes. May show signs of minor shelf wear and contain limited notes and highlighting. Codice articolo 1903223040-2-4