Articoli correlati a Parsons Bookshop: At the Heart of Bohemian Dublin,...

Lynch, Brendan Parsons Bookshop: At the Heart of Bohemian Dublin, 1949-1989 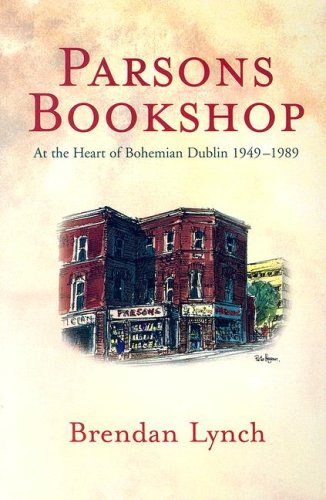 "Tell us, Mary, about the morning that Brendan [Behan] and Patrick [Kavnagh] arrived [at the bookshop] together"...Even Beatrice laughed as Mary recounted the confrontation which could have put Sarajevo in the shade. "We all held our breaths for the fireworks. But they greeted each other cordially, and Patrick suggested they adjourn to Mooney's for a libation. 'They b-barred me, we'll try Searson's,' Brendan stammered. 'I've a problem there,' Patrick growled. Between the two of them, there was nowhere local they could go. They had to trudge off like a pair of delinquents to the wilds of Ballsbridge." For forty years from 1949 to 1989, Parson's Bookshop was a Dublin literary landmark and meeting place. Situated on the crest of Baggot Street's Grand Canal bridge, it defined the Bohemian quarter of writers and artists known as Baggotonia. Owned by May O'Flaherty who was ably assisted by Mary King and three other ladies, Parson's Bookshop played a major role in Ireland's literary and cultural development. "Parson's bookshop - where there were often as many writers on the floor as on the shelves," said Mary Lavin. In this affectionate chronicle of a very special establishment, Brendan Lynch describes the Dublin literary and artistic scene from the fifties to the eighties. Parson's was a second home to Brendan Behan and Patrick Kavanagh, and other Nobel and Pulitzer-winning customers included Flann O'Brien, Liam O'Flaherty, Frank O'Connor, Mary Lavin and Seamus Heaney. Artist customers ranged from Louis le Brocquy, Patrick Scott, Patrick Pye, Michael Kane and Brian Bourke to the ultimate Bohemian, Owen Walsh, who occupied a local studio-cum-boudoir for the lifespan of the bookshop. Archbishops of various denominations also worshipped at this shrine to literature, while political visitors ranged from senators and government ministers to taoiseach Garrett Fitzgerald and president Jack Lynch. With numerous anecdotes, stories and personal reminisces about some of Ireland's greatest literary figures, "Parson's Bookshop" provides a warm and amusing account of life in Bohemian Dublin.