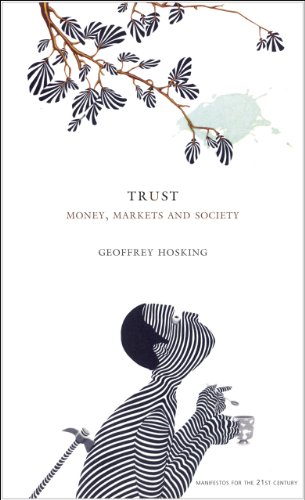 Mutual trust is an essential element of a globalized economy, and a market economy without trust leads only to further disaster. If we want to ensure future stability, Geoffrey Hosking argues that we must first understand the characteristics of this trust relationship—and to that end he provides tools to seek out where socio-economic trust has been misplaced and where it can be strengthened positively for the future.

Social and economic trust in the United Kingdom and the United States waned in the 1990s and exploded into a major crisis of economic distrust in the form of the credit crunch that began in 2007. The crisis, argues Hosking in Trust, was the result of a bubble of trust misplaced in financial markets and state welfare systems by individuals, companies, and governments alike. He carefully and approachably explains that the roots of this crisis go back more than three centuries, but its symptoms greatly intensified as governments deregulated financial markets in the 1980s.

“Among the most enlightening and informative accounts of what has already been one of the most amazing peaceful revolutions in modern times.”—New York Times Book Review, on Hosking’s The Awakening of the Soviet Union

Geoffrey Hosking was professor of Russian history in the School of Slavonic and East European Studies at the University of London from 1984 to 2007. He has written many books and articles on the history of Russia and the Soviet Union, including The First Socialist Society and The Awakening of the Soviet Union.

Descrizione libro Condizione: New. Brand New Paperback International Edition.We Ship to PO BOX Address also. EXPEDITED shipping option also available for faster delivery.This item may ship from the US or other locations in India depending on your location and availability. Codice articolo ABBUN-18665