Articoli correlati a Best of Enemies: A History of US and Middle East Relations,... 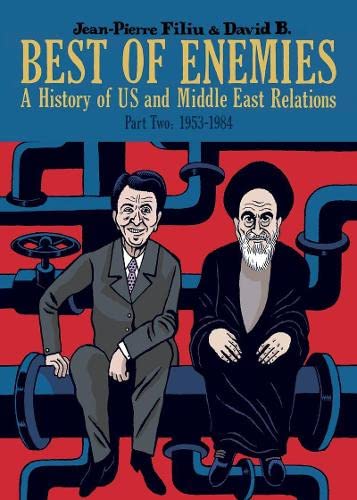 TThe second volume of Jean-Pierre Filiu and David B.’s graphic novel history of US–Middle East relations begins in the 1950s with the Eisenhower Doctrine and ends with the Lebanese War of 1982. A perceptive and authoritative account of this turbulent historical period, Best of Enemies provides an overview of the Six-Day War between Israel and the neighboring states of Egypt, Jordan, and Syria; the Iranian Revolution of 1979; the Soviet invasion of Afghanistan; and other Middle Eastern conflicts involving the United States. A beautifully drawn account of the time period, Best of Enemies is a milestone of graphic novel reportage and of great relevance to the current political situation in the Middle East.

Jean-Pierre Filiu, a world-renowned expert on the Middle East, is a professor at the Paris School of International Affairs. A regular guest lecturer at Harvard and MIT, he has advised the French Minister for the Interior on Middle East relations. He lives in Paris. David B. is an Eisner Award–nominated artist and a founding member of the independent French publisher L’Association. He lives in Paris.

The second volume of Jean-Pierre Filiu and David B's acclaimed history of US-Middle East relations documents a period of dramatic conflict and change, beginning in the 1950s and ending with the Lebanese War of 1982. The Blitzkrieg of the Six-Day War saw the Jewish state triple in size. In less than a week, the Middle East was transformed: Israel had taken the Sinai Peninsula from Egypt, the West Bank from Jordan and the Golan Heights from Syria. It was a conflict that began an era of U.S.-led intervention in the Middle East, which continued in the lead-up to the Iranian Revolution of 1979. The demise of the Shah, and the ascent of Ayatollah Khomeini, stoked anti-American sentiment in the country, and the U.S. became known as 'The Great Satan'. When Soviet troops invaded Afghanistan, the CIA began a proxy war by supporting anti-soviet Muslim forces, among them a young Saudi, Osama Bin Laden. Best of Enemies, Vol. 2 is a perceptive and authoritative account of a turbulent historical period. Intelligent, accessible and beautifully drawn, it brings to life a period of history that is of great relevance to international relations today.