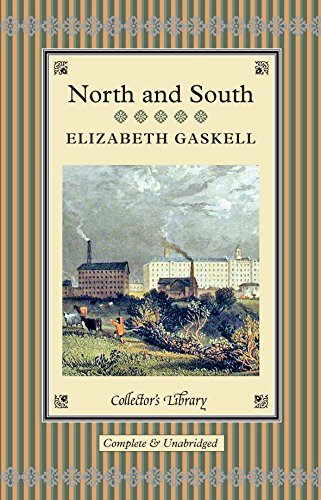 North and South is a wonderful blend of social comment on the dramatic changes in society brought about by the industrial revolution in the early Victorian age and a compelling love story. Written from the author's first-hand experience, the novel follows the story of Margaret Hope, the young heroine, in her move from the tranquil setting in rural southern England to the raw and turbulent northern town of Milton. Margaret takes an instant dislike to new home and its people. She hates the dirt, noise and lack of civilisation. Her distaste extends to handsome and charismatic cotton mill owner John Thornton whom she believes epitomises everything unpleasant about the North. However, as Margaret gradually begins to settle in Milton she learns about the poverty and workplace struggles. As events conspire to throw Margaret and Thornton together, the two spirited characters have to overcome their repressed physical attraction for one another and conquer prejudices of class and circumstance. The passion and the history embedded in this narrative is as appealing and engrossing today as when it was first published.

Mrs Gaskell was born Elizabeth Stevenson in London in 1810. Her mother Eliza, the niece of the potter Josiah Wedgwood, died when she was a child. Much of her childhood was spent in Cheshire, where she lived with an aunt at Knutsford, a town she would later immortalise as Cranford. In 1832, she married a Unitarian minister, William Gaskell (who had a literary career of his own), and they settled in Manchester. The industrial surroundings offered her inspiration for her novels. Gaskell's first novel, Mary Barton, was published anonymously in 1848. The best-known of her other novels are Cranford (1853) and North and South (1855). Elizabeth met Charlotte Brontë in 1850, and they struck up a great friendship. After Charlotte's death in 1855, her father, the Reverend Patrick Brontë, asked Gaskell to write her biography to counteract gossip and speculation. The Life of Charlotte Brontë was published in 1857. Gaskell was also a skilled proponent of the ghost story. Her last novel, Wives and Daughters, said by many to be her most mature work remained unfinished at the time of her death in 1865.