Articoli correlati a Magnificent Marble Statues: British Sculpture in the... 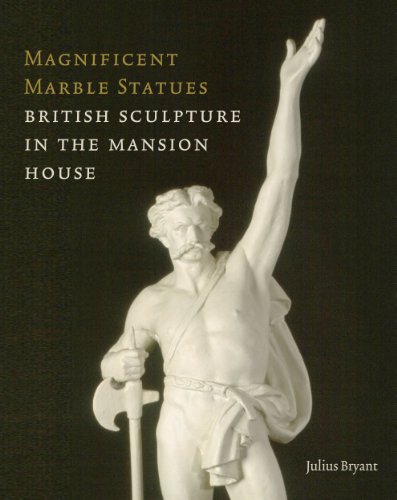 The Mansion House, the palatial city residence of the Lord Mayor of London, is home to one of the capital's finest collections of British sculpture from the 18th and 19th centuries. Forming part of the spectacular setting for official functions, as well as the background to busy offices and the home of the Lord Mayor and his family, the sculpture ranges from handsome chimney pieces and elaborate stuccowork wall decorations to heroic single statues of figures from British literature and history. Described by the architectural historian Nicolaus Pevsner as"magnificent marble statues", the sculptures are almost unknown to the general public. Their significance, however, is much greater than as an example of the changing fortunes of Victorian sculpture and of the fluctuating attitudes of the Corporation of London to art patronage. Taken as a whole, the sheer range and variety is exceptional. After the monuments in Westminster Abbey and St Paul's Cathedral and the galleries of the Victoria and Albert Museum, Mansion House presents the most extensive permanent exhibition of British sculpture in London. It differs from these rival collections in the range of its sculpture, from Palladian chimneypieces carved by City stonemasons and virtuoso Rococo plasterwork by anonymous stuccadors to heroic ideal statues made to rival the greatest works from antiquity and the Renaissance. The time has come for a fresh appreciation of these"magnificent marble statues". The first book on the sculpture ever published, this beautifully illustrated study reveals the subjects of the sculptures, the stories behind the commissions and the importance of the artists themselves. New photography highlights the qualities of the individual sculptures in their historic settings. A unique insight to the challenges and delights of living, working and raising a family in Mansion House is given in an introductory essay by the Lady Mayoress, Clare Gifford. The sculptures and architecture are described by Julius Bryant, Keeper of Word and Image at the Victoria and Albert Museum. This beautifully produced new handbook provides a companion volume to The Harold Samuel Collection, Dutch and Flemish Pictures at the Mansion House (Paul Holberton Publishing, 2012) by Michael Hall and Clare Gifford.

Descrizione libro Paperback. Condizione: Used; Good. **SHIPPED FROM UK** We believe you will be completely satisfied with our quick and reliable service. All orders are dispatched as swiftly as possible! Buy with confidence!. Codice articolo 3702956