Articoli correlati a Making Majesty: The Throne Room at Dublin Castle, A... 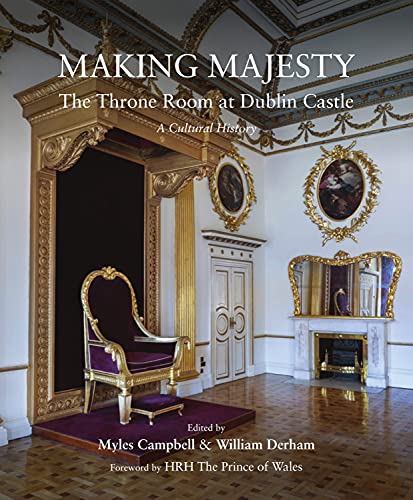 Descrizione libro Irish Academic Press Ltd, Ireland, 2017. Paperback. Condizione: New. Language: English. Brand new Book. The Throne Room in Dublin Castle was the ultimate focus of vice-regal ceremony, royal visits and many great state occasions both before and after Irish independence in 1922. It has been a touchstone of British occupation and Irish autonomy that can be analysed through the details of its form and furnishing. Making Majesty is an elegant collection of essays, by leading Irish art and architectural historians, that cover a broad range of perspectives in refining our understanding of this tremendously lavish space, shedding new light on the major and minor figures who created, ornamented, decorated and used it. Volume One of a three-volume architectural history of Dublin Castle, Making Majesty presents original findings that are set to overthrow preconceptions about the nature of the presence of the British monarchy in Ireland. With deeply insightful analysis that draws upon uniquely accessed archives, Campbell and Derham bring to light every aspect of how Dublin Castle's authorities wished to be perceived and how that changed according to the whims of imperious Viceroys, renowned craftsmen, and an Irish state wishing to secure an image of its newfound self-determination. This fascinating work is of immediate interest to anyone with a passion for the history of Ireland, its art, design and architecture. Codice articolo AGM9781911024729