Articoli correlati a The Parisian 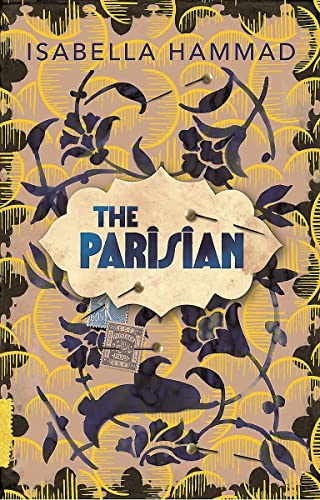 As the First World War shatters families, destroys friendships and kills lovers, a young Palestinian dreamer sets out to find himself.

Midhat Kamal navigates his way across a fractured world, from the shifting politics of the Middle East to the dinner tables of Montpellier and a newly tumultuous Paris. He discovers that everything is fragile: love turns to loss, friends become enemies and everyone is looking for a place to belong.

Isabella Hammad delicately untangles the politics and personal tragedies of a turbulent era – the Palestinian struggle for independence, the strife of the early twentieth century and the looming shadow of the Second World War. An intensely human story amidst a global conflict, The Parisian is historical fiction with a remarkable contemporary voice.

"Isabella Hammad’s remarkably accomplished debut novel very quickly snares the reader’s attention... Hammad is a natural storyteller... The writing is deeply humane, its wide vision combined with poised restraint... A story of cultures in simultaneous conflict and concord, The Parisian teems with riches – love, war, betrayal and madness – and marks the arrival of a bright new talent." (Guardian)

"Breathtaking... Isabella Hammad establishes herself here as a literary force to be reckoned with. The Parisian is, in many ways, an extraordinary achievement." (Irish Times)

"A stunning 576-page debut, both a lush rendering of Palestinian life a century ago under the British Mandate and a sumptuous epic about the enduring nature of love... a small, beautiful, human story blazing against the enormity of the sociopolitical one... a novel you sink into." (Vogue)

"One of the most ambitious first novels to have appeared in years... Written in soulful, searching prose, it’s a jam-packed epic... Hammad is a natural social novelist with an ear for lively dialogue as well as an ability to illuminate psychological interiority... Hammad is a writer of startling talent – and The Parisian has the rhythm of life." (Observer)

"The Parisian has an up-close immediacy and stylistic panache that are all the more impressive coming from a London-born writer still in her 20s... There are intimidating 19th-century precedents – Tolstoy, Turgenev, Stendhal... Isabella Hammad has crafted an exquisite novel that, like Midhat himself, delves back into the confusing past while remaining wholly anchored in the precarious present." (New York Times Book Review)

"[In] this lavish, leisurely and immersive novel... an English-language epic steeped in Palestinian stories from almost a century ago... Ms Hammad overlays a sophisticated, up-to-date grasp of the scars, overt and covert, left by unjust authority onto the traditional pleasures of the sprawling historical saga... a novelist of vision." (Economist)

"Hammad has an exquisite control on her subject: this is precise writing, measured, and careful... her detail makes you feel the homes and cities she takes us to, and the people that inhabit them, are as multifaceted and mysterious as those of real life... It is Hammad’s sustaining of both perspectives, the minutiae that make up an individual life and the macro political upheavals that change a country forever, that makes The Parisian so impressive." (Independent)

"The Parisian is akin to plunging into a great 19th-century classic, thanks to the languorous pace, easy poise, minute observations and the apparent ease with which Hammad takes her third person narrative from one character to another... There is also an underlying urgency to this rich, luscious novel... The Parisian is a skilful demonstration of how the personal and the political are inescapably intertwined." (Financial Times)

"You’ll be transported across decades, emotions, plots and people with gravity-defying ease... Uniting themes such as the breakdown of the Middle East (it’s an invaluable understanding into the problems that continue to this day) and the rootlessness of migrants, Hammad creates a real sense of time and place luxuriating in the details of food, smells and sights; take a weekend off and disappear into her vision." (Stylist)

"It is startling to think this ambitious tour-de-force was written into life by someone at the start of their literary career... with even the tiniest of details meticulously observed, this debut follows the changing desires of a boy as he is moulded into a man, the irresistible pull of family loyalty and the search for peace, as much within, as on, the global stage." (Scotsman)

Isabella Hammad was born in London. She won the 2018 Plimpton Prize for Fiction for her story 'Mr. Can’aan'. Her writing has appeared in Conjunctions and the Paris Review. The Parisian is her first novel.