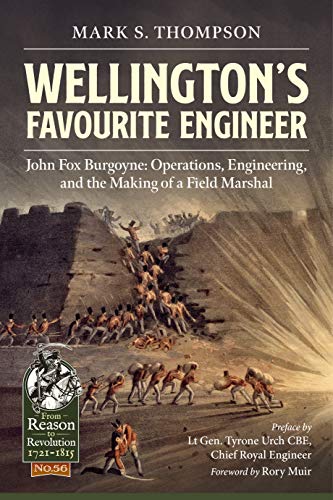 Descrizione libro Helion & Company, United Kingdom, 2020. Paperback. Condizione: New. Language: English. Brand new Book. This book is about the formative years of the first field marshal in the Corps of Royal Engineers, John Burgoyne, and his service in the Napoleonic Wars. Burgoyne's early service was in the Mediterranean, followed by service in the Iberian Peninsula from 1808-1814. Having built up a good relationship with Wellington, Burgoyne was selected to command the engineers in the disastrous American campaign of 1814-15. Burgoyne's father was also a well-known British general who, sadly, is remembered for his surrender of the British Army at Saratoga, rather than for more positive reasons. He died penniless, leaving his children, including John, to be cared for by family friends. Burgoyne seemed to spend the rest of his life working to obtain his independence. Like many engineers, Burgoyne kept detailed diaries, also writing comprehensive letters and analyses of his actions. These give contemporary knowledge of many notable events, particularly during the Peninsular War. His letters to fellow officers give an insight into the opinions and thoughts of an engineer officer, views which are often not visible in official communications. The main theme of the book is to show the development of a young officer during the Napoleonic Wars from an inexperienced subaltern through to someone who advised Wellington and his generals directly on military matters. His involvement with the senior officers in the army was not restricted to 'engineering' matters and he was trusted to carry out staff roles on many occasions. Burgoyne was present at many of the sieges and commanded at some. There is a wealth of unpublished information in his journals and letters. Burgoyne was highly critical of some of the sieges, even those that were considered successful. He was also critical of those where he commanded, particularly, Burgos in 1812. When Burgoyne was advising Raglan in the Crimea at the siege of Sevastopol, the failures at Burgos were used to undermine his position. The previous biography of Burgoyne by his son-in-law, George Wrottesley, was published nearly 150 years ago and is flawed in a number of ways. This new interpretation will help our understanding of this officer and present a different view on some of the key events during the Peninsular War. Wellington's Favourite Engineer includes a Foreword by Rory Muir. Codice articolo BZV9781913118938

Descrizione libro Helion & Company Ltd., 2020. Paperback. Condizione: New. From Reason to Revolution 1721-1815 No.56. New paperback copies at a reduced price. ; Biography of John Burgoyne, the first field marshal in the Corps of Royal Engineers, and his service in the Napoleonic Wars. Illustrations & maps. ; 331 pages. Codice articolo 68267

4. Wellington?s Favourite Engineer: John Fox Burgoyne: Operations, Engineering, and the Making of a Field Marshal (From Reason to Revolution)

5. Wellington?s Favourite Engineer: John Burgoyne: The Making of a Field Marshal (From Reason to Revolu