Articoli correlati a Sacred and Secular: The Piccus Collection of Tibetan...

Sacred and Secular: The Piccus Collection of Tibetan Rugs 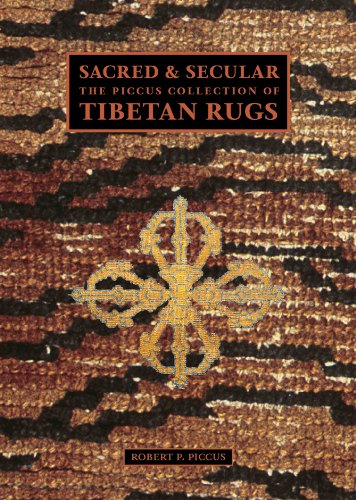 Rugs have been woven and used in Tibet for centuries, but, until recent years, have been ignored by collectors and scholars alike because available examples were generally brightly coloured, chemically dyed, clearly modern commercial production of little aesthetic appeal. This situation changed in the mid-1980s when the Chinese authorities began to allow tourism and foreign visitors discovered early, naturally dyed examples that had not been seen in the West. "The Piccus Collection of Tibetan Rugs" was formed during the exciting window of opportunity that existed during the 80s and 90s to collect in this previously little-known area. The Collection demonstrates the genuine aesthetic sense and cultural achievements of the unknown Tibetan weavers who produced these masterpieces. The book tells the story of the rugs' collection, the individuals involved and the evolution of scholarship in this field. Beautifully illustrated, the book is divided into design categories, including Tigers and Leopards, Dragons, Tantric, Geometrics, Medallions, Warp Face Backs, and Nomadic, among others. It also includes technical information and a visual glossary that will be useful for collectors and designers alike. The book documents a previously little-known aspect of Tibetan history and culture that deserves to be recognized and is an essential addition to any collectors and design libraries.

L'autore:
Collecting has been a passion for Robert Piccus since schoolboy days. He began to amass substantial collections of classic Belgian stamps, Indian postal history, maps and antiquarian books while living in Belgium and New York City. Moving to Hong Kong in 1968, he and his wife immersed themselves in the vibrant local art scene, collecting Vietnamese ceramics, Tibetan silver ritual objects and manuscript covers, Indian and Southeast Asian sculpture, Chinese rugs and classical Chinese furniture. His interest in Tibetan rugs was sparked by the appearance of early examples in the mid-1980's, when Chinese authorities first allowed foreigners to visit Tibet. From the time of his first purchase in 1988 until his move to San Francisco in 2000, Piccus has matched his passion for collecting Chinese furniture with an equal passion for early Tibetan rugs, an art form that reflects the deep cultural heritage of the anonymous weavers of the high plateaux of Tibet.