Articoli correlati a Lob Lie-by-the-fire; or, The luck of Lingborough, and...

Lob Lie-by-the-fire; or, The luck of Lingborough, and other stories (1893). By: Juliana Horatia Ewing, Illustrated By: Randolph Caldecott: (children's book ) Illustrated 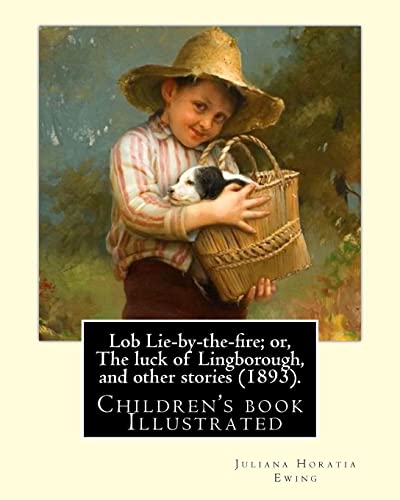 1. Lob Lie-by-the-fire; or, The luck of Lingborough, and other stories (1893). By: Juliana Horatia Ewing, Illustrated By: Randolph Caldecott: (children's book ) Illustrated (Paperback)

Descrizione libro Createspace Independent Publishing Platform, United States, 2018. Paperback. Condizione: New. Illustrated. Language: English. Brand new Book. Randolph Caldecott ( 22 March 1846 - 12 February 1886) was an English artist and illustrator, born in Chester. The Caldecott Medal was named in his honour. He exercised his art chiefly in book illustrations. His abilities as an artist were promptly and generously recognised by the Royal Academy. Caldecott greatly influenced illustration of children's books during the nineteenth century. Two books illustrated by him, priced at a shilling each, were published every Christmas for eight years. Caldecott also illustrated novels and accounts of foreign travel, made humorous drawings depicting hunting and fashionable life, drew cartoons and he made sketches of the Houses of Parliament inside and out, and exhibited sculptures and paintings in oil and watercolour in the Royal Academy and galleries. Juliana Horatia Ewing (née Gatty) (3 August 1841 - 13 May 1885) was an English writer of children's stories. She displayed sympathetic insight into children's lives, admiration for things military, and strong religious faith. Youth and marriage: Known as Julie, she was the second of ten children of the Reverend Alfred Gatty, vicar of Ecclesfield in Yorkshire, and Margaret Gatty, who was herself a children's author. The children were educated mainly by her mother, but Julie was often the driving force behind their various activities: drama, botany etc. Later she was responsible for setting up a village library in Ecclesfield and helped out in the parish with her three sisters. Early stories of hers appeared in Charlotte Yonge's magazine Monthly Packet. On 1 June 1867, she married Major Alexander Ewing (1830-1895) of the army pay department. He was also a keen churchgoer, who shared his wife's interest in literature. Within a week of their marriage, the Ewings left England for Fredericton, New Brunswick, Canada, where he had received a new posting. They remained there for two years, before returning to England in 1869 and spending eight years in the army town of Aldershot. Although her husband was sent overseas again, to Malta in 1879 and Sri Lanka in 1881, Ewing's poor health would not allow her to accompany him. The Ewings moved to Trull, Somerset, on his return in 1883, and in 1885, to Bath, in the hopes that the change of air would do her good. However, her health continued to deteriorate, and after two operations, she died there on 13 May 1885.She was given a military funeral at Trull three days later. Her sister Horatia Katharine Frances Gatty (1846-1945) published a memorial of Julie's life and works which includes a publication history of her stories. A later selection includes some of Julie's letters and drawings about Canada. A biography by Gillian Avery appeared in 1961. "Child-novels" Roger Lancelyn Green calls her works the "first outstanding child-novels" in English literature. Her works are notable for their sympathetic insight into child life, their admiration for things military, and their reflection of her strong Anglican faith. They include Mrs. Overtheway's Remembrances (1869), A Flat Iron for a Farthing (1872), Six to Sixteen (1875), Jackanapes (1884), Daddy Darwin's Dovecot (1884), and The Story of a Short Life (1885). The latter story inspired Grace Kimmins to start the Guild of the Poor Brave Things to help children with disabilities in London. Grace (and later Ada Vachell took their motto Laetus sorte mea (Happy in my lot) from Ewing's book. Rudyard Kipling claimed to know her novel Jan of the Windmill (1872-3, 1876) almost by heart. He wrote in his autobiography, Something of Myself, "One [book] I have still, a bound copy of Aunt Judy's Magazine of the early 'seventies, in which appeared Mrs. Ewing's Six to Sixteen. I owe more in circuitous ways to that tale than I can tell. I knew it, as I know it still, almost by heart. Here was a history of real people and real things.". Codice articolo APC9781985230590

3. Lob Lie-by-the-fire; or, The luck of Lingborough, and other stories (1893). By: Juliana Horatia Ewing, Illustrated By: Randolph Caldecott: (children's book ) Illustrated