Articoli correlati a Ayla Fox & the Mirror of Souls: Volume 1 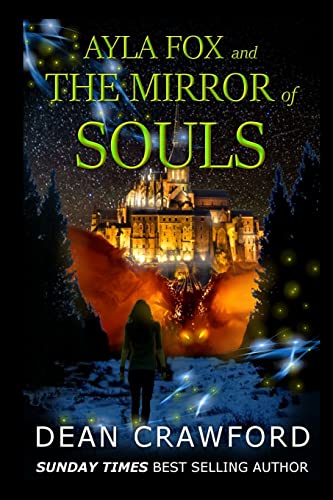 Descrizione libro Createspace Independent Publishing Platform, United States, 2018. Paperback. Condizione: New. Language: English. Brand new Book. Have you ever stared at yourself in a mirror for too long and started to feel strange? Troubled teen Ayla Fox always wanted to be different, but she couldn't have imagined the world that lay hidden within her bedroom mirror. Struck by lightning during a freak storm, Ayla finds herself able to see things that others cannot and realizes that our world is intimately connected with another, where sorcery, not technology, rules. Within the Mirrorealm awaits her true destiny as a Hybrin, someone who can cross through into other realms where the impossible becomes possible. Hurled into a conflict with a cruel wytch by the name of Terra, Ayla must join a rag-tag band of weary warriors on a desperate mission to locate the mysterious Mirror of Souls and turn the tide of the war. The first volume in the epic Ayla Fox series - "Perfect for fans of Harry Potter!" Praise for Dean Crawford: "The fossilized remains of a 7,000-year-old creature dug from the sands of the Negev Desert in Israel become the bones of contention in Dean Crawford's fast-paced debut thriller. The book neatly threads together a wild variety of plotlines." - Wall Street Journal .". cleverly introduced premise. assured pacing and plotting." - Publishers Weekly "The action is frenetic, in the vein of Matthew Reilly's Scarecrow series. Crawford is an able storyteller who smoothly orchestrates the plot's twists and turns. " - Kirkus Reviews .". brilliant high-concept, high-octane thriller." - The Guardian "A fast-paced and entertaining yarn." - Melbourne Age "Partly mythical read, part thriller this pacy tale is a page turner guaranteed to keep you up late." - The Sun "Get the cameras rolling-Indiana Jones meets Alien. What a combination of mystery, suspense, and unspeakable horror. I loved it!" - R.L. Stine "This is an amazingly good, intelligently told novel by an exciting new British author." - Eurocrime "Earth-shattering intrigue, hyperdrive action and a desperate race to save humanity, cranked up to the max with scarily realistic science and apocalyptic religion thrown in for good measure . . . a major new talent has hit the mystery thriller scene!" - Scott Mariani ABOUT THE AUTHOR Dean Crawford began writing after his dream of becoming a fighter pilot in the Royal Air Force was curtailed when he failed their stringent sight tests. His Ethan Warner series of high-concept novels have regularly featured on the Sunday Times paperback bestseller list and have sold all over the world. A full-time author, he lives with his partner and daughter in Surrey. Codice articolo APC9781985815926

2. Ayla Fox and the Mirror of Souls

3. Ayla Fox and the Mirror of Souls