Articoli correlati a Bessarion Scholasticus: A Study of Cardinal Bessarion's... 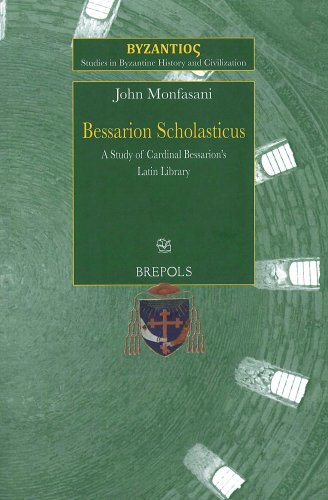 John Monfasani is Professor at the Department of History, University at Albany State University of New York. His field of interest is European intellectual history, with a special interest in Renaissance intellectual and religious history. He has published mainly on Greek and Latin humanists in fifteenth-century Italy.

Descrizione libro Brepols, Turnhout, 2012. Couverture souple. Condizione: Neuf. Condizione sovraccoperta: Neuf. Edition originale. Studies in Byzantine History and Civilization (SBHC 3) J. Monfasani Bessarion Scholasticus: A Study of Cardinal Bessarionżs Latin Library XIV+306 p., 1 b/w ill., 156 x 234 mm, 2012 ISBN: 978-2-503-54154-9 Languages: English Paperback The publication is available. Retail price: EUR 125,00 Bessarion (d. 18 November 1472) first made a name for himself as one of the Greek spokesmen at the Council of Ferrara-Florence in 1438-39. After becoming a cardinal, he several times entered conclaves as a serious candidate for the papacy. The library he bequeathed to the Republic of Venice, destined to become the historic core of the modern Biblioteca Marciana, is justly famous for its extraordinary collection of Greek manuscripts. Celebrated in his own time for his patronage of humanists, he was also Italyżs leading Platonist before the emergence of Marsilio Ficino. He always held in reverence his teacher in Greece, the Neoplatonist philosopher George Gemistus Pletho, and his In Calumniatorem Platonis, printed in Rome in 1469, was a pivotal text in the Plato-Aristotle controversy of the Renaissance. Nonetheless, Bessarion was a great admirer of medieval scholasticism and especially of Thomas Aquinas. 'Bessarion Scholasticus' examines Bessarionżs relationship with Latin culture as evidenced by his library, personal relations, and writings. It examines his humanist collection, his scholastic collection, his Thomism, and the circle of scholars associated with his household, called Bessarionea Academia by contemporaries. Half of 'Bessarion Scholasticus' is a catalogue raisonné of scholastic texts and manuscripts in Bessarionżs library. The volume offers the first edition of Bessarionżs autograph listing of the differences between Scotists and Thomists as well as first editions of prefaces by various authors addressed to Bessarion. In addition, the appendices include statistical tables of Bessarionżs holdings of Latin classical authors and of texts in civil and canonical law and a register of the members of his cardinalitial famiglia before he became cardinal legate in Bologna in 1450. John Monfasani is Professor at the Department of History, University at Albany ż State University of New York. His field of interest is European intellectual history, with a special interest in Renaissance intellectual and religious history. He has published mainly on Greek and Latin humanists in fifteenth-century Italy. Language : English Text. Codice articolo 006449