Foxlee, Neil Albert Camus's 'the New Mediterranean Culture': A Text and Its Contexts: 38

Albert Camus's 'the New Mediterranean Culture': A Text and Its Contexts: 38 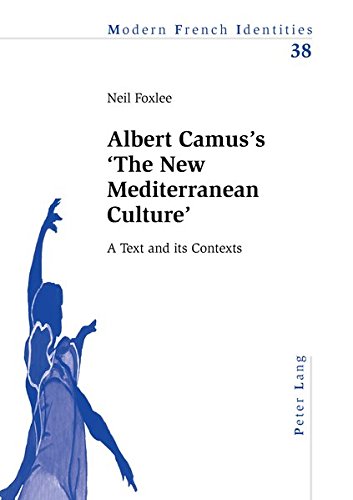 This book was shortlisted for the R.H. Gapper prize 2011.
On 8 February 1937 the 23-year-old Albert Camus gave an inaugural lecture for a new Maison de la culture, or community arts centre, in Algiers. Entitled ‘La nouvelle culture méditerranéenne’ (‘The New Mediterranean Culture’), Camus’s lecture has been interpreted in radically different ways: while some critics have dismissed it as an incoherent piece of juvenilia, others see it as key to understanding his future development as a thinker, whether as the first expression of his so-called ‘Mediterranean humanism’ or as an early indication of what is seen as his essentially colonial mentality.
These various interpretations are based on reading the text of ‘The New Mediterranean Culture’ in a single context, whether that of Camus’s life and work as a whole, of French discourses on the Mediterranean or of colonial Algeria (and French discourses on that country). By contrast, this study argues that Camus’s lecture – and in principle any historical text – needs to be seen in a multiplicity of contexts, discursive and otherwise, if readers are to understand properly what its author was doing in writing it. Using Camus’s lecture as a case study, the book provides a detailed theoretical and practical justification of this ‘multi-contextualist’ approach.

Neil Foxlee is a Visiting Research Fellow at Lancaster University and a lecturer at the University of Central Lancashire, where his teaching has included MA modules on Political Rhetoric and the Rhetoric of Narrative and Image. His published work includes several articles on Camus and a study of the campaign rhetoric of Barack Obama. He is also a contributor to (and co-editor of) G. McKay et al. (eds), Subcultures and New Religious Movements in Russia and East-Central Europe (Peter Lang, 2009).

Descrizione libro Condizione: Good. A+ Customer service! Satisfaction Guaranteed! Book is in Used-Good condition. Pages and cover are clean and intact. Used items may not include supplementary materials such as CDs or access codes. May show signs of minor shelf wear and contain limited notes and highlighting. Codice articolo 303430207X-2-4