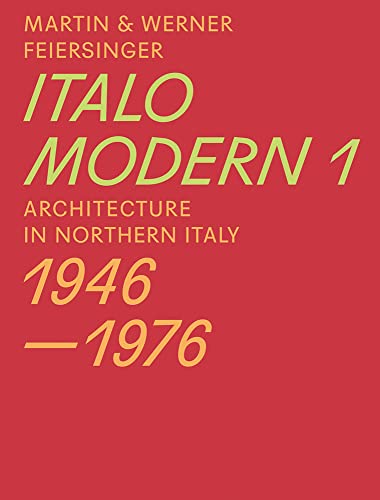 Vienna-based architect Martin Feiersinger and his brother, artist and photographer Werner Feiersinger have extensively travelled across Northern Italy in order to document the region’s modern architecture after World War II. Italomodern 1 and 2 is the result of their travels, the most authoritative survey of Northern Italy’s architecture between 1946 and 1976.  In their study, they have focused exclusively on distinctive buildings rather than entire urban structures, and they have selected the projects included as exemplary representations of neorealism, rationalism, brutalism, and organic.

Italomodern 1 features 84 buildings and Italomodern 2 contains an additional 132 buildings. All of the buildings are represented with photographs, a concise text, the exact address, as well as with selected floor plans, sections, or elevations. The images present a subjective point of view, showing each building in its present state. An appendix provides rich information on the architects and selected other buildings and further reading for each firm. The book offers a glimpse into an era when society’s aspirations found expression in the built environment. Each volume is self-contained and also makes an insightful and useful guide for architecture lovers and travelers.

Descrizione libro Park Books, Switzerland, 2017. Paperback. Condizione: New. Language: English. Brand new Book. Martin Feiersinger, Vienna-based architect, and his brother Werner Feiersinger, artist and photographer, have travelled extensively around Northern Italy to document the region's modern architecture from the three decades immediately following World War II. Their view focused on individual buildings rather than entire urban structures, the Feiersingers have selected projects by representatives of neo-realist and rationalist, brutalist, or organic architectural schools. Italomodern 1 features 84 buildings with photographs, a brief descriptive text also giving the exact address, as well as with selected floor plans, sections, or elevations. The images present a subjective point of view, showing each building in its present state. A map of Northern Italy and an appendix, providing rich information on the architects and listing also selected other buildings and further reading for each firm, complement the architectural portraits. The two volumes, Italomodern 1 and 2, each an entirely self-contained book, make handy and smartly structured guides for architecture lovers and professionals alike. Codice articolo AAR9783038600282