Articoli correlati a Quantum Chance: Nonlocality, Teleportation and Other... 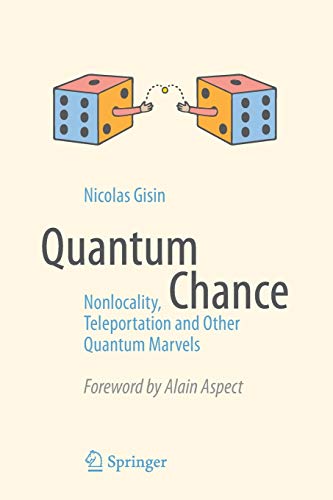 From Bell's Theorem to experiments in quantum entanglement, this book helps readers gain a solid understanding of one of the most fascinating areas of contemporary physics. It illuminates the many logical paradoxes of quantum physics without using mathematics.

From the book reviews:

“This is one of the better books on quantum probability, nonlocality and statistics. ... The textbook also explains this for interested audiences of quantum theory at the beginners to intermediate levels. I highly recommend this for bedtime readings for those with some physics background at the intermediate levels. It avoids a lot of the tedious math coupled with quantum mechanics.” (Joseph J. Grenier, Amazon.com, February, 2015)

“Gisin’s book covers the counterintuitive concept of entanglement which posits a ubiquitous randomness capable of manifesting itself simultaneously in more than one place. ... This book will be of interest and value to everyone curious about the foundational problems of quantum mechanics and their fascinating applications, such as cryptography and teleportation.” (Christian Brosseau, osa-opn.org, January, 2015)

“Though very short--at only around 100 pages--this is one of the most enjoyable books I’ve read recently. Its central concept is non-local correlation (nonlocality). ... The book explains entanglement, quantum nonlocality, and quantum randomness, and describes a number of their possible applications. ... the book presents very complicated concepts in clear way, thus making the text enjoyable for a broad audience.” (Alexander Tzanov, Computing Reviews, December, 2014) L'autore:

Nicolas Gisin is Head of the Applied Physics Group at the University of Geneva and cofounder of ID Quantique. He is internationally renowned for his work in quantum communication and Editor of the series "Quantum Science and Technology".

In 2009 he received the first John S. Bell award for the demonstrations of long distance entanglement and quantum teleportation, together with his numerous contributions to the theory of Bell inequalities.