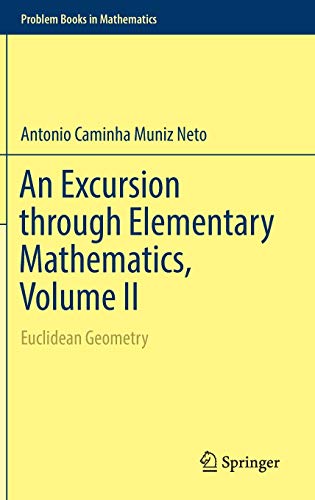 This book provides a comprehensive, in-depth overview of elementary mathematics as explored in Mathematical Olympiads around the world. It expands on topics usually encountered in high school and could even be used as preparation for a first-semester undergraduate course. This second volume covers Plane Geometry, Trigonometry, Space Geometry, Vectors in the Plane, Solids and much more.
As part of a collection, the book differs from other publications in this field by not being a mere selection of questions or a set of tips and tricks that applies to specific problems. It starts from the most basic theoretical principles, without being either too general or too axiomatic. Examples and problems are discussed only if they are helpful as applications of the theory. Propositions are proved in detail and subsequently applied to Olympic problems or to other problems at the Olympic level.
The book also explores some of the hardest problems presented at National and International Mathematics Olympiads, as well as many essential theorems related to the content. An extensive Appendix offering hints on or full solutions for all difficult problems rounds out the book.

“The authors provides an overview of elementary geometry in relationship with questions from mathematical Olympiads around the world. ... The book also explores some problems proposed at various national and international mathematics Olympiads. This book is useful for high-school students interested in preparing for mathematical Olympiads.” (Teodora-Liliana Rǎdulescu, zbMATH 1395.51001, 2018)