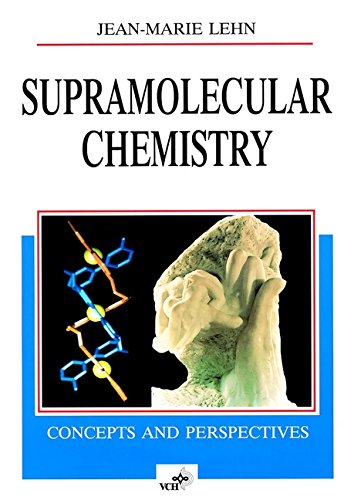 Supramolecular chemistry is a central theme not only in chemistry, but in neighboring disciplines including physics and the biological sciences. The author has introduced this notion and has been awarded the Nobel Prize for his achievements in this area. He presents here the concepts, lines of development and perspectives of this highly interdisciplinary and burgeoning field of research.

By placing the basic concepts into a broader perspective, the author succeeds in inspiring, stimulating and challenging the creative imagination of his reader.

Jean-Marie Lehn is a French chemist. He received the Nobel Prize in Chemistry together with Donald Cram and Charles Pedersen in 1987 for his synthesis of cryptands.

Jean-Marie Lehn Supramolecular Chemistry Concepts and Perspectives Chemistry Beyond the Molecule "Where nature finishes producing its own species, man begins, using natural things and with the help of this nature, to create an infinity of species." Leonardo da Vinci Molecular chemistry rules the covalent bond. Supramolecular chemistry is "chemistry beyond the molecule", whose goal is to gain control over the intermolecular non-covalent bond. It is concerned with the entities of higher complexity than molecules themselves—supramolecular species and assemblies held together and organized by means of intermolecular, binding interactions. It is a highly interdisciplinary field of science and technology, bridging chemistry with biology and physics. Supramolecular chemistry embodies the creative power of chemistry. By its very essence, by its ability to create and through the beauty of its objects, chemistry is an art as well as a science. Indeed, it fashions entire new worlds that do not exist before they are shaped by the hand of the chemist, just as matter, shaped by the hand of the sculptor, becomes a work of art. This is powerfully expressed by the sculpture of Auguste Rodin on the cover picture.